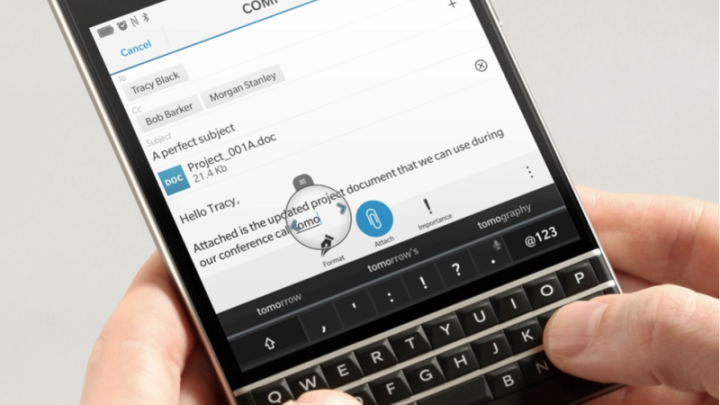 BlackBerry is feeling very good about its new BlackBerry Passport. In fact, the company feels so good about it that it’s even decided to quote a BGR post as proof that the new device is going to be a hit with consumers.

In a new blog post, BlackBerry points to some of the recent media attention given to its Passport smartphone and says that all of the responses posted from Internet commenters on those articles are evidence that consumers are “clamoring” for the new device.

“The BlackBerry Passport is proving that it is hip to be square, as early glimpses of the device’s  massive, trend-bucking screen and innovative, touch-enabled keyboard last week attracted huge media attention and plenty of positive comments from readers (read: potential buyers),” writes BlackBerry. “The Passport’s boundary-breaking design and oversized 1,440×1,440 screen resonated with many writers… Even BGR’s Brad Reed was moved to write that ‘the BlackBerry Passport wasn’t designed for iSheep and Fandroids who want to play Candy Crush all day — it’s for people who want to do real work, and that means having a physical keyboard that can fire off emails like no other phone.'”

Not all media coverage was glowing, of course, and BlackBerry acknowledges that some tech sites “took a cautious approach to the Passport’s innovations, opting to defend a status quo dominated by an endless conveyor belt of entertainment-driven, homogenous devices.” This is their loss, says BlackBerry, because “when everything tastes like chicken, maybe it’s time for a different flavor.”

Nonetheless, the company took solace in the positive comments left by numerous anonymous posters who stuck up for the device’s design.

“I don’t see a problem,” wrote one anonymous commenter at CNET that was cited by BlackBerry. “iPhone and Android is for kids. BlackBerry is for adults. Who needs glitz and glamor.”

As is often the case, we had several posters in our comment section similarly write good things about the Passport’s design.

“The Passport is truly a game changer,” wrote one particularly insightful anti-Samsung commenter who goes by the name of “S-Crap.” “BlackBerry and CEO Chen have a winner.”