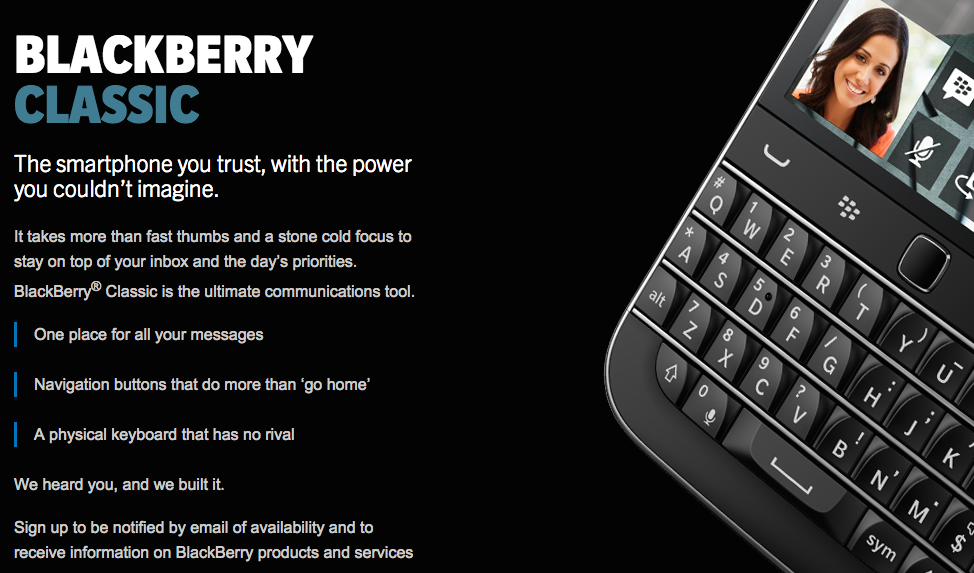 If you’re in the mood to relive the glory years of 2007 through 2009, then BlackBerry has just the device for you. In an open letter to BlackBerry diehards posted on Wednesday, BlackBerry CEO John Chen explains why the company’s new BlackBerry Classic is perfect for everyone who still loves how great BlackBerry devices were before the company tried to compete with Apple and Google with touchscreen-only devices such as the Storm and the Z10.

“It’s tempting in a rapidly changing, rapidly growing mobile market to change for the sake of change — to mimic what’s trendy and match the industry-standard, kitchen-sink approach of trying to be all things to all people,” Chen writes. “But there’s also something to be said for the classic adage, if it ain’t broke don’t fix it. BlackBerry Classic reflects that. It is classic BlackBerry – complete with a top row of navigation keys and a trackpad. It’s the device that has always felt right in your hands and always felt right in your busy day.”

Of course, the Classic isn’t just an old-timey BlackBerry — it does run on BlackBerry 10, which means it’s not a BlackBerry 7 legacy device. Chen says this means the Classic “incorporates all the best productivity and collaboration features on any mobile device, including the BlackBerry Hub and our all-new BlackBerry Blend.”

It’s at this point where you’re probably expecting me to make a snide comment about BlackBerry releasing phones that went out of fashion years ago. However, I actually think releasing phones like this is a smart move on BlackBerry’s part.

Why? Because even though hardcore BlackBerry users are smaller in number these days, they’re some of the most dedicated and passionate tech fans I’ve seen, with the possible exception of Apple fans. Catering to them and making them happy is the best move BlackBerry can make at this point, especially if it means bringing back longtime fans who are still using their old BlackBerry Bolds but who have avoided BlackBerry 10 so far because of missing features like the trackpad and function keys.

Even though the number of people who want these kinds of devices is certainly a niche market at this point, it could also be a high-profile niche market. World leaders including Barack Obama, David Cameron and Angela Merkel all still use BlackBerry devices, as does Google chairman Eric Schmidt, as does (incredibly) reality TV star Kim Kardashian. In fact, Kardashian earlier this week said that she was “on a mission” to make sure BlackBerry devices never go extinct.

If BlackBerry is smart — and the new leadership under John Chen seems much more with it than the previous regime that made Alicia Keys creative director — it would send Kardashian a free Classic and see if she likes it just as much as the old-school Bolds she’s been hoarding off eBay.

Some people really just want a phone that does the same things as well as 2008-era BlackBerry models… and that’s not a bad thing for BlackBerry these days.