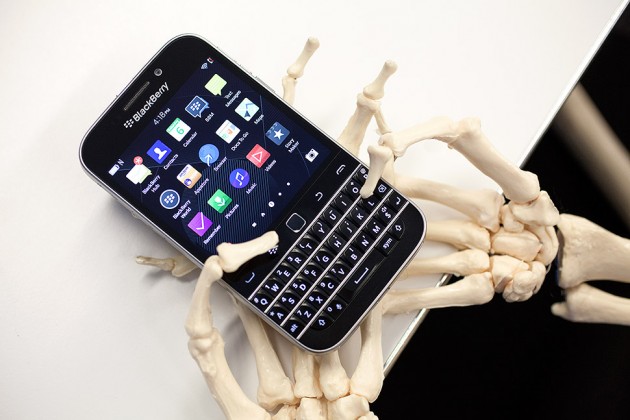 The BlackBerry Classic is definitely something of a throwback to old BlackBerry Bold models, although it definitely features much better specs and software than those smartphone relics. However, Bloomberg Businessweek has just posted a “hands on” article about the Classic that brutally trolls the device by showing it being held by a pair of bony skeletal hands, as you can see in the picture above. The message is clear: The Classic feels ancient and dead.

RELATED: Here’s why I love what BlackBerry is doing with the Classic

“Wednesday’s launch revealed a set of features the device’s earliest users will find familiar,” Bloomberg Businessweek writes. “Chen is trying to appeal to the power users of old (“Don’t mess around with this thing,” he said one told him), even as he works to make BlackBerry a software company with corporate and government clients who place a premium on security.”

The publication then concludes that there’s “no danger” of anyone thinking the Classic will be popular or trendy.

While it’s easy to make jokes at the Classic’s expense, what this sort of analysis misses is that BlackBerry isn’t trying to pitch the device to the consumer market. Instead, it’s trying to get people who still use old-school BlackBerry Bold models — and there are more of them than you think — to pull the trigger and upgrade to a BlackBerry 10 device.

If BlackBerry were positioning the device as the next big hit among consumers, then yes, they would be deservedly laughed at. But from the looks of it, BlackBerry has grown wise enough to know that it’s chasing a much smaller niche nowadays.