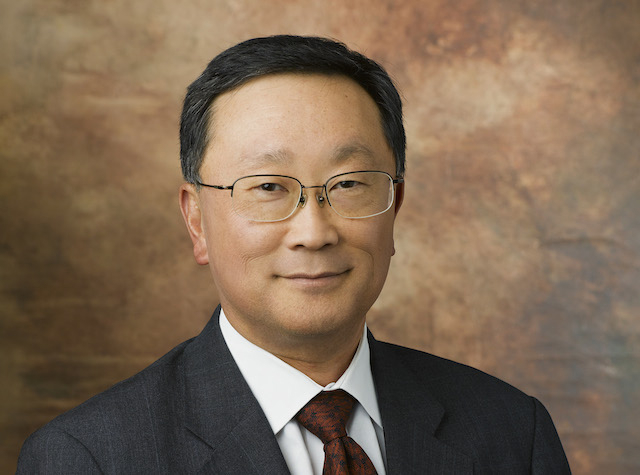 Brand new BlackBerry CEO John Chen has written a letter detailing BlackBerry’s strength and strategy for CNBC, and it was was published earlier Monday morning. It contains humorous lies and is an obvious attempt to spin BlackBerry’s current situation into something less dire. Let’s take a look at Chen’s letter, line by line:

It’s been easy for competitors to promote negative stories about BlackBerry, focusing on the business of the past. But I’m not focused on who BlackBerry used to be — I’m focused on what BlackBerry will be today and in the future.

Today, our company is strong financially, technologically savvy and is well-positioned for the future.

Big laughs all around. BlackBerry just lost $4.4 billion in the company’s most recent quarter on only $1.2 billion in revenue. And by well-positioned you mean a terrible mistake of an operating system, no ecosystem, no apps and no great hardware? Not to mention absolutely zero cloud services?

In less than two months, my team and I have engineered a new strategy to stabilize the company, return to our core strength in enterprise and security, and maximize efficiencies.

This isn’t the first time I’ve held the reins at a tech company facing challenging circumstances. I’m here to tackle this challenge because I believe we can succeed.

Or your compensation is just exorbitant and you’re bored. Chen stands to make nearly $100 million in compensation from BlackBerry under his current contract.

I’m surrounded by a talented team of industry leaders, including our new leaders for enterprise, corporate development and strategic planning, and marketing. In the coming weeks, I’ll continue to build out my leadership team with those who have the skills and passion to get BlackBerry back on the path to profitability.

You’re surrounded by a couple of people you brought over. Besides that, as far as anyone is concerned, everyone left at that company is a failure. All of the good people have left, and the good ones that are still there will never be utilized.

It was important to make swift and impactful changes to ensure that our customers’ investments in BlackBerry’s infrastructure and solutions are secure. With these changes, I’ve made a commitment to be transparent with my strategy and how I will execute.

BlackBerry has no infrastructure anymore. You don’t use your NOC for practically anything; BES 10 is a VPN tunnel with some MDM policies.

The team’s first priority was to focus on our core business drivers, so we had to move to a new operating unit structure: Enterprise Services, Messaging, QNX Embedded business and the Devices business. This structure will drive greater focus on services and software, establish a more efficient business model for the Devices business, and support each unit’s transformation and growth objectives.

Messaging which is BBM, which you’re not monetizing and usage has already fallen off a cliff. QNX embedded business? What does that include? Cars? Go-karts? Washing machines? Printers? Good strategy.

When it comes to enterprise, we’re still the leader. Don’t be fooled by the competition’s rhetoric claiming to be more secure or having more experience than BlackBerry. With a global enterprise customer base exceeding 80,000, we have three times the number of customers compared to Good, AirWatch and MobileIron combined. This makes BlackBerry the leader in mobile-device management.

Let’s see if we’re fooled. What percent of those 80,000 global customers are running BlackBerry 7 devices with BlackBerry 7 BES? Does anyone think that the majority of those will actually upgrade to BES 10 and BlackBerry 10 hardware? Not I, said the cat.

And you’re not a leader in mobile device management when you are not selling any BlackBerry smartphones anymore. You can’t count BlackBerry-only devices in that category because Good manages far more iPhone and Android devices than BlackBerry does, so when everyone eventually does drop their BlackBerry phones and servers, you’re going to be facing a huge uphill battle.

Many in the regulated industries — those with the most stringent security needs — still depend solely on BlackBerry to secure their mobile infrastructure. For governments, BlackBerry cannot just be replaced — we are the only MDM provider to obtain “Authority to Operate” on U.S. Department of Defense (DoD) networks. This means the DoD is only allowed to use BlackBerry. Across the globe, seven out of seven of the G7 governments are also BlackBerry customers.

Yet what’s so interesting is that the White House leaves its BlackBerrys behind when they travel to China. Curious, huh? How about the fact that multiple sources have told me that employees at BlackBerry used to be able to just pull up BIS subscriber information and watch their emails, messages and more in real time?

You’re also talking about an extremely narrow set of customers. You want to jump into the ring and boast about how you can sell to a couple hundred thousand specialized customers across the world, be my guest, but you know as well as I do that the majority of corporations and governments are already using iOS and Android devices more than BlackBerry, so it’s obviously quite fine with them.

Our popular messaging service, BBM, is also renowned in regulated industries for being the most secure mobile-messaging service, and consumers love it, too. In the last 60 days, more than 40 million new iOS and Android users have registered to use BBM. We will continue to invest in this popular service and build out its features and channels, with plans to turn it into a revenue stream in the coming years.

40 million is a great number, congrats. One thing, however… can you tell us how many of those 40 million users are active in the last week? Because everything I can tell is that people (children) installed it for nostalgia and have never touched it again, so some stats here would be great. You’re also not ever going to reach the scale of WhatsApp, Kik or LINE, so BBM actually isn’t much of a strategy at this point in the game for BlackBerry. But let’s see.

QNX has always been one of our most exciting technologies and it is poised for further growth. Already the dominant machine-to-machine technology of the automotive industry, new capabilities and cloud services are being unveiled at CES in January, and we’re looking toward adjacent verticals for expansion.

Incredibly exciting. The PlayBook was so popular and it washed over consumers and businesses with so much excitement that underwear sales went through the roof. Same for BlackBerry 10 with the Z10, Q10 and the Z30, right? Everything else you said makes no sense and won’t matter to anyone.

To be more nimble and responsive to market demands and customer needs, we have streamlined our Devices business model and partnered with Foxconn to manufacture smartphones in Indonesia and other fast growing markets. We’re also focusing our design and hardware team on developing high-quality products at competitive prices. Leveraging Foxconn’s scale and efficiency will also allow us to compete more effectively and create speed to market since we can design for faster product lifecycles. With a partner dedicated to our hardware, BlackBerry can focus on what we do best — iconic design, world-class security, software development and enterprise-mobility management.

I don’t disagree with this strategy as a whole, but when you break it down, it’s not the correct one. Don’t overestimate the power of the BlackBerry brand. It’s also bad enough that consumers generally hate your current devices and you had to write down billions of dollars of inventory on them, but by offloading the design and production of your low-to-mid range handsets, you further cheapen what your value proposition is to these consumers.

BlackBerry hasn’t had iconic design in a long, long time. World-class security, software development and enterprise-mobility management mean nothing to Indonesians. Why do you even still want to make phones then? Oh, because you’re offloading everything to Foxconn so if it doesn’t work you don’t have to worry about spinning down the factories, getting stuck with the components, and writing down more devices. Makes sense, but it’s telling on where you think BlackBerry is going and that’s away from devices period.

I don’t mean to keep harping on this low-cost strategy fumble but I feel I must. The China Mobile M601 handset is a 4-inch dual-core Android 4.2 handset with 4GB of storage, a 1,500 mAh battery, Bluetooth and Wi-Fi, and it sells for around $50. How is BlackBerry competing here? The China Mobile M701 is a quad-core 1.2GHz phone with 1GB of RAM, an 8-megapixel front camera, 12-megapixel rear camera and a 2,000 mAh battery, and it sells for $200. How is BlackBerry competing here?

We’ve accomplished a great deal in these last couple months, and we’re positioned for the long haul. We have a strong cash position with more than $3 billion on hand, a renewed spirit, and trusted technology, network and platform.

I believe BlackBerry has a clear lane ahead of us to create new trails as a nimbler, more agile competitor.

The journey has just begun.