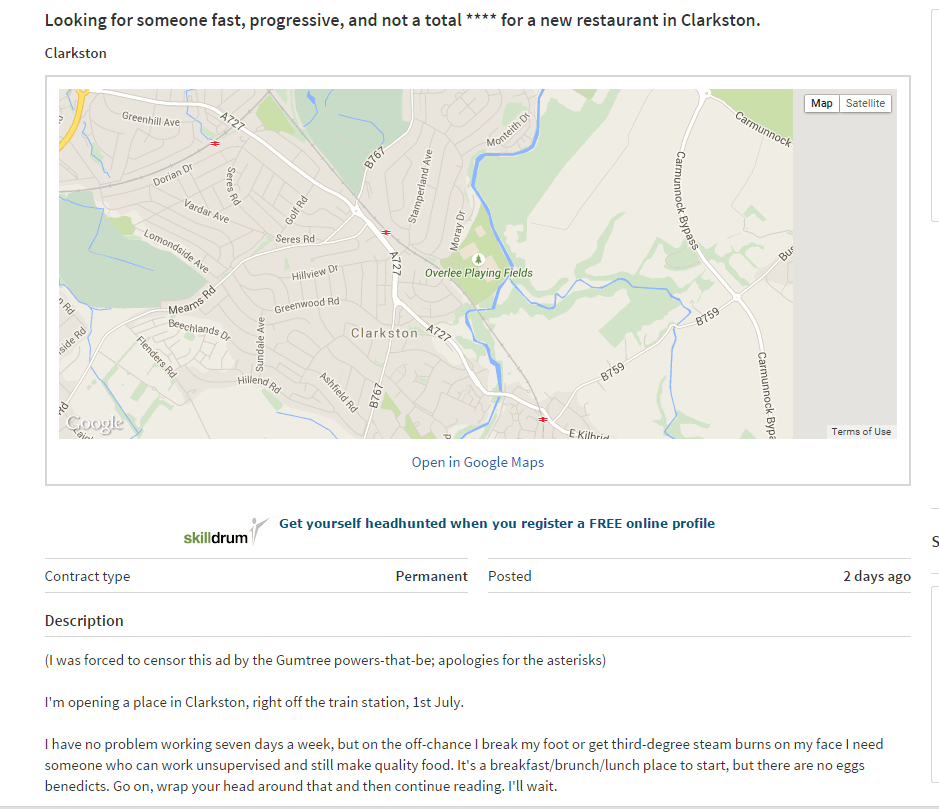 Would you work at a job where its boss is a self-proclaimed “d*ckhead” who tells you straight up that the pay is “sh*t?” That’s exactly what one American restaurateur is Scotland told prospective applicants in a hilariously honest job posting before he thought better of it and decided to delete it from the web. However, Mashable informs us that his original post still survives thanks to the miracle of caching and it’s easily the funniest thing you’ll read today.

FROM EARLIER: There’s a new BBM for iOS feature that will actually make iMessage users jealous

The man starts off on a happy note by telling applicants to not bother sending him their CVs if they don’t have reasonable taste in food because he doesn’t want to read them.

After complaining some about his wife, he then tells applicants what he’ll be paying them.

“The money is sh*t,” he informs them. “It’s £7/hour and a cut of the tips. Don’t ask for more because I don’t have it. You’ll literally be making more than me because I am essentially working for free until the place is paid off.”

He also gives helpful pointers on things applicants should avoid saying in their cover letters.

“If you have one that says you’re a ‘hard-working team player that can also function well alone’ and that you ‘value customer service and punctuality’ I will stab myself in the face with a pencil and nobody will get a job,” he writes.

And finally, the man tops it all off by giving them a preview of what he’ll be like to work for.

“If you think I sound like an obnoxious d*ckhead, congratulations,” he concludes. “You are observant and will go far in life. Don’t let it discourage you, though. I’m only a d*ckhead for the first three years you know me. After that I’m a total sweetheart.”

So how about it, everyone? Would you be happy spending three years working for a d*ckhead who pays you sh*t? To be fair, that’s something many of us have had to do at one time or another, so we give this restaurant owner props for being totally upfront about it.