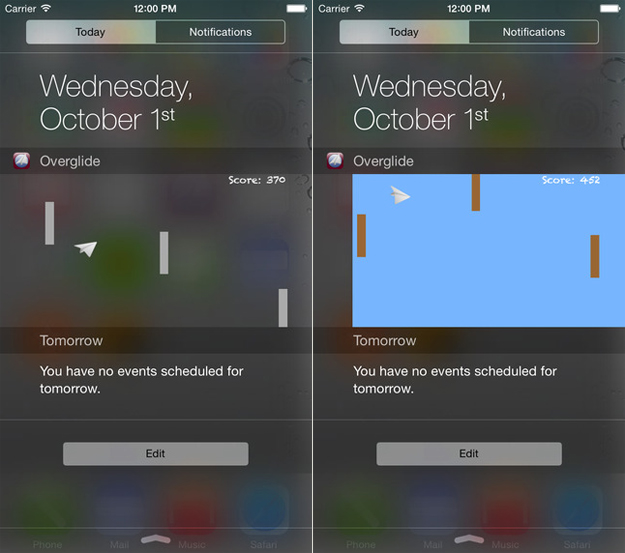 Apple’s massive iOS 8 update was released this past September and developers are still updating their apps to take full advantage of the thousands of new capabilities Apple added in its new mobile software. In fact, developers will continue to add new features made possible by iOS 8 for many months to come.

One of the most interesting new user-facing features added in iOS 8 is the addition of Today widget support, which is a battery-friendly compromise that adds widget functionality to iPhones and iPads but moves it off of the home screen. And now, a new app has brought what is definitely one of the most fun and creative Today widgets we’ve seen so far.

Overglide, the game widget that lets you play anywhere, anytime, directly from the notification screen and even while your iOS device is locked.

Pilot the paper plane as far as possible while dodging the obstacles and facing ever increasing difficulty. Just touch and hold to glide up and release to fly down. You can quickly access Overglide from the today screen or lock screen to easily try and beat your top score anytime.

It has never been easier to hide the fact that you’re goofing off on your iPhone during class or a meeting, and it’ll cost you just $0.99 for the privilege.