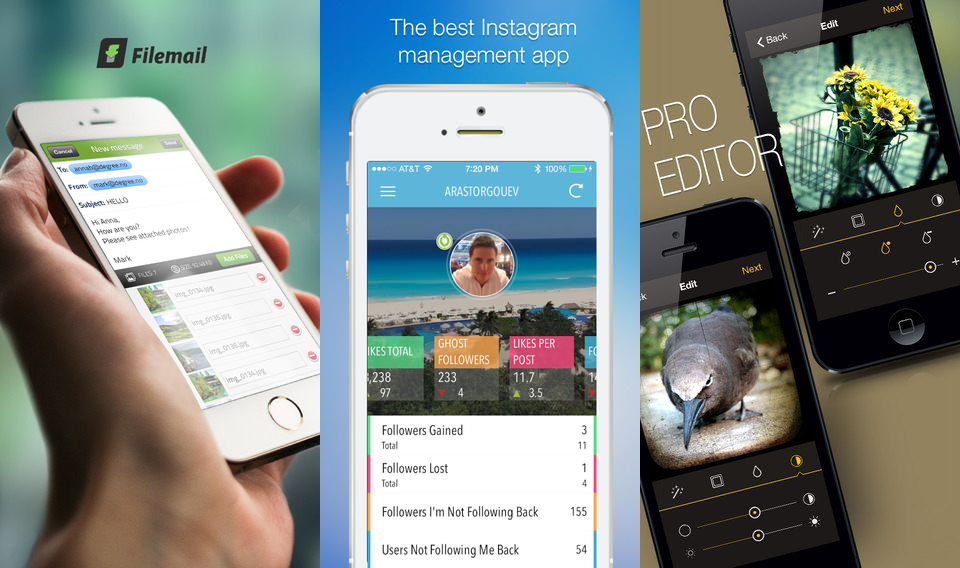 Can you believe 2014 is almost over? December is here and it’ll be 2015 before you know it, but there will still be plenty of awesome iPhone and iPad app sales to enjoy before the year is done. And with the holidays fast approaching, saving money everywhere you can is a necessity.

Monday’s batch of paid iOS apps on sale includes eight apps normally worth a combined $34, but they’re all free right now if you hurry.

◉ What we’ve found in reviews from users and editors:

It’s a type of camera with two objective lenses of the same focal length which was invented around 1870.

Reflex can give you the instant effects with old camera looks and feelings, make your digital photo into an old school and vintage style.

Your digital photo looks so analog~

The fastest and simplest way to send and share your photos/videos from your phone or pad.

Filemail lets you send your pictures and videos from your iPhone or iPad to any e-mail for free. Unlike cloud sharing, you don’t have to create any accounts or fiddle with shared folders. People you send to don’t have to struggle with noisy download sites. You click “Send”. They get a fast download link in their e-mail. Simple as that! So simple in fact, that 10 million people and thousands of businesses decided to use Filemail so far!

Key functionalities:
• The fastest and easiest way to transfer media files from your iPhone or iPad
• Send up to 30 GB for free to any e-mail address!
• Send any file using “Open In…” functionality
• The recipient gets a fast, hassle-free download link
• Unlimited number of downloads
• No need to register or create accounts
• You always know when (and if) the file was received

Record real-time tonemapped HDR video in HD resolution right from your iPhone 6: a world first! (See below if you don’t have an iPhone 6.) Watch the demo video at: http://www.thaliacam.com/live/ios.html SANTA MADE THIS FREE FOR A LIMITED TIME!

Built from the ground up for iPhone 6 and iPhone 6 Plus, Thalia™ Live HD/R™ lets you record movies with large variations in brightness across a scene. Details in bright skies and in dark shadows are visible in splendid detail at the same time.

Thalia Live HD/R records HDR video in real time. You can change the tonemapping settings right on the screen and immediately see how it changes the video. Settings available include EV compensation, zoom, global contrast, local contrast, radius, noise reduction, gamma, and saturation. Video is output as a Quicktime video in 720p with 30 fps, suitable for watching, sharing, and editing with most video editing software. Our patent-pending HD/R technology brings out detail where in a normal video there would be just black or white. For a strong visual effect often associated with HDR, simply reduce the global contrast setting and crank up local contrast, radius, gamma, and saturation.

Only the iPhone 6 and iPhone 6 Plus support HDR video recording. Some older models are supported, but recording will not be in HDR and frame rates and resolution will be reduced. Thus, on older models you can still experiment with the app, but the recordings will, for technical reasons, neither be true HDR nor HD video. iPad Air 2 records tonemapped video in 1080p, i.e., true HD video in even higher resolution than the iPhone 6, but not in true HDR–i.e., on iPad Air 2 you get the visual effect, but not much expansion of the camera’s dynamic range.

THE MOST USEFUL MANAGEMENT TOOL FOR INSTAGRAM IN APP STORE!

Ever wondered who your ghost followers are? Who are your secret admirers?

With InstaFollowers you can track new followers, find who is not following you back and more!

Features:
– Switch between your Instagram accounts (SUPER CONVENIENT!)
– Check new followers / lost followers
– Track ghost followers
– Check who is posting nearby / far, including their address
– Check secret admirers
– Find out who your best followers and who are your worst
– Check who isn’t following you back
– Find who did you forget to follow back

Play any song in the world by just saying its name.

1. Just say a name of a song
2. Say Play will find your song and play it

Record timelapse video in true HDR and up to 1080p HD resolution on your iPhone!

Watch the demo video and a before/after video at http://www.thaliacam.com/lapse/ios.html

The patent-pending HD/R™ technology in Thalia™ Lapse HD/R takes several different exposures of the same scene for each video frame and works magic (technical term: tonemapping) to turn them into a video stream reflecting the scene’s dynamic range.

* Up to 5 EV values of dynamic range expansion, depending on the scene shot
* Multi-stage deflickering avoids the flickering artifacts that often occur when stitching together time-lapse video from photos
* Deghosting avoids ghosting artifacts from moving objects
* Processing on the iPhone’s GPU calculates tonemapped video in real time, preserving local contrast on scenes with strong dynamic range
* Stores high-quality movies in Quicktime format with up to 1080p resolution (can be set by user; 1080p available on iPhone 4S, iPhone 5, iPad 2 and higher, lower resolutions on other devices)
* Amazing built-in processing modes for a subdued effect, adding punch to the video, and artistic effect
* If desired, adds a soundtrack from your iTunes library to the video

Time-lapse videography by its very nature demands a certain patience from the videographer. You will need some sort of contraption to keep your phone pointing steadily in one direction while you are shooting the video. It’s certainly possible to jury-rig this using a book or such, but we strongly recommend using a tripod. See http://www.thaliacam.com/lapse/ios.html for details.

Experience ON-RAILS action with JAW-DROPPING GRAPHICS in the next generation of arcade-style 3D SHMUPs for the first time with full retina support on all modern iOS devices with a completely redefined “Turbo” style of game play never before seen in the Quantum Legacy Universe! Team up with Colonel Seth Blair as you pilot one of 4 unique spaceships during your 3+ hour ON-RAILS journey through 20 action-packed Turbo missions filled with breathtaking cinematic game play and highly stylized storytelling, EXCLUSIVELY on the iOS! Featuring:

• Brand New Turbo DLC: provides you with a new playable ship “Forsydon”, new level variations, improved graphics/effects, new AI, plus a never before experienced speed and finger-twitch ON-RAILS intensity worthy of a next-gen 3D Space SHMUP!
• Enjoy Simple and Intuitive Controls: tilt your iOS device left/right to steer your ship manually while providing an opportunity for a skillful avoidance of enemy projectiles.
• Alternatively, for a casual ON-RAILS experience: forgo tilting and simply tap your enemies to engage the Auto Pilot while controlling your shields and weapons with a smooth 2-button interface.
• Bright and awe-inspiring JAW-DROPPING Turbo graphics with highly polished game play will take your breath away! For the first time ever, Quantum Legacy HD Turbo provides you with full native retina support on the iPhone 5, and iPad with Retina display.
• 20 story-oriented Turbo campaign missions offer over 3 hours of action-packed SHMUP-style game play.
• RPG Style Progression System allows you to FREELY acquire, pilot and level-up 4 unique starships (including the new Turbo “Forsydon”) while unlocking over 16 different types of shield and weapon upgrades.
• Optional In-App Purchases allow you to skip the RPG grind and instantly acquire any of the playable ships! In addition, you can Restore your existing purchases to unlock content on multiple iOS devices.
• Face more than 25 different types of enemies, including unique Gigantic Bosses in every mission.
• Game Center support: with 6 Turbo-DLC Leaderboards and 21 elusive Turbo Achievements that demand an additional 10+ hours of game play.
• Over 40 minutes of original music was created to accompany your Quantum Legacy experience.
• Highly Stylized and Action-Oriented Storytelling is told through the com-sat radio of your starship, with full voice-overs for the game’s array of quirky characters.
• Turbo AI with Dynamic Difficulty and Randomized Enemy Waves: provide for a near endless replay value, as the enemies constantly change and adapt to your style of game play each time you engage an existing mission.

Steer your ship manually by tilting your device left and right, or tap your enemies to engage the ON-RAILS “Autopilot”. To maximize damage, it is best to be facing your enemies directly before pressing the right “Weapons/Fire” button. Holding the left “Shield” button will allow you to deflect all enemy projectiles. Prolonged use of the Weapons/Shields will cause a temporary overload. Note that it is NOT possible to fire your weapons while Shields are active until you level-up your starship and unlock Translucent Shielding at Level 5.

Successfully completing each mission will unlock new game content while allowing you to level-up in an RPG-like fashion. Completing missions 5, 10 and 15 will allow you to FREELY acquire one of 4 unique playable starships.

The next time you’re at a party, bar or business meeting and someone asks, “Hey, are you on Facebook, Twitter, LinkedIn…?” share direct links to your social network profiles — with HandleShare. No more guessing. No more missed connections.

With HandleShare, you can share your handles and names for:

Now you don’t have to guess if you’ve found the right person on Facebook, Twitter, LinkedIn, Tumblr…. HandleShare helps you make the right connections.