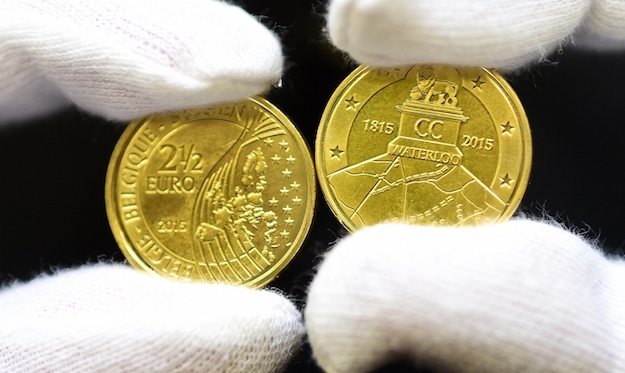 This past March, France took offense when it learned of Belgium’s plans to release a 2 euro coin to commemorate the 200 year anniversary of the French defeat at the Battle of Waterloo. France vigorously protested the coin’s release, arguing that it would create conflict within the European Union. France also penned a letter arguing that the coins would elicit an “unfavorable” reaction from French citizens.

When the dust settled, Belgium’s hand was forced, resulting in them scrapping over 180,000 commemorative coins that they already minted.

But as it turns out, Belgium had a bit of a trick up its sleeve.

The New York Times reports that Belgium instead opted to proceed with their plans for a commemorative coin, albeit in a 2.5 euro coin.

“This week, Belgium decided to circumvent French resistance by invoking a little-known European Union rule that allows countries to issue euro coins of their choice, provided they are in an irregular denomination,” the Times reports. “That led to the unveiling of a €2.50 coin — a first in Belgium — and 70,000 of them have now been minted.”

The coin itself features a lion sitting atop a hill where France suffered its humiliating defeat. It’s worth noting, though, that the coins will only be usable within Belgium.

Though the French Army’s defeat at the Battle of Waterloo was 200 years ago, the historically significant battle can still stir up strong emotions in France.

Nonetheless, Belgium sees no reason to apologize. Addressing the matter head-on, Belgium finance minister Johan Van Overtveldt said: “Our goal is not to revive old quarrels. In a modern Europe, there are more important things to sort out. But there’s been no battle in recent history as important as Waterloo, or indeed one that captures the imagination in the same way.”

Indeed, the Battle of Waterloo marked the end of the First French Empire along with the end of Napoleon’s reign.