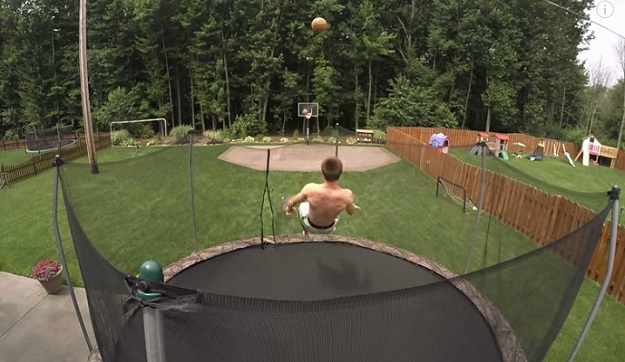 Given the sheer volume of head-scratching and awe-inspiring video content that fills up the web on a daily basis, it’s not too often that we come across a video that truly blows us away. The entertainment bar, so to speak, has been elevated to such an extent that really impressive feats are harder to come by than ever before.

Well, the video below not only meets that bar, but arguably sets it even higher. You want to be blown away? You want to be impressed? Look no further, friends. Your search has come to an end.

What 19 year old Kevin Libertowski is able to do with two basketballs and a trampoline here is pure brilliance. We can’t even imagine how many tries it took to get this trick down pat, but no matter the number, the end result certainly justifies the time put in.

I’m back with another video, this time with two flips and two shots. I made this shot from a trampoline over 60 feet away from the hoop I was shooting on. The shot starts off with a ball in my hands and another in between my legs. I then back flip releasing the ball in my hands towards the hoop, then go immediately into a front flip while exchanging the ball from my legs to my hands, then wait to rotate around a bit and shoot the second shot at the hoop while still in my front flip. Each shot reaches the hoop at the exact same time colliding inside the net for a double swish.