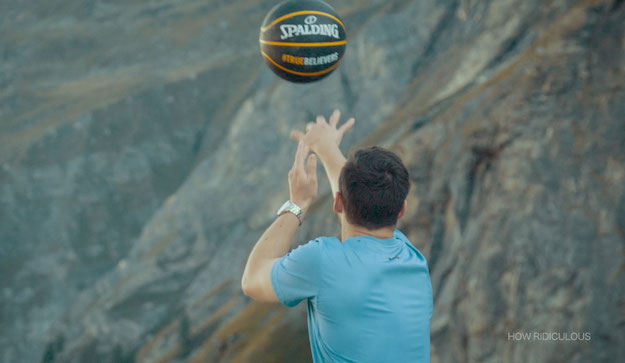 Back in the day, my friends and I would often spend our lazy afternoons playing basketball on any one of our driveways. Sure, we were more than capable of breaking a few ankles and nailing 3’s from long-range, but we certainly weren’t busy setting any type or records.

The same, however, can’t be said for Brett Stanford, Derek Herron and Scott Gaunson. Recently, the trio of friends trekked all the way to the top of the Mauvoisin Dam in Switzerland where they set a new Guinness World Record for the highest basketball shot ever made. Perched atop of the dam, Herron squared up his shoulders and launched a shot towards a basket located 593.7 feet below.

Incredibly, it was nothing but net.

All the more impressive, it took Herron just two attempts before he managed to swish a shot on his third try. We’ve seen no shortage of lucky shots, trick shots and downright dumbfounding basketball shots before, but this world record making shot from hundreds of feet up is nothing if not unique.

Interestingly enough, the aforementioned trio previously held the record for the longest Basketball shot in history back in 2011 when the record stood at 219 feet. Earlier this year, the record was utterly smashed when a sports entertainment group known as Dude Perfect managed to drain a shot from 533 feet.

Video of that ridiculous feat can be seen below.