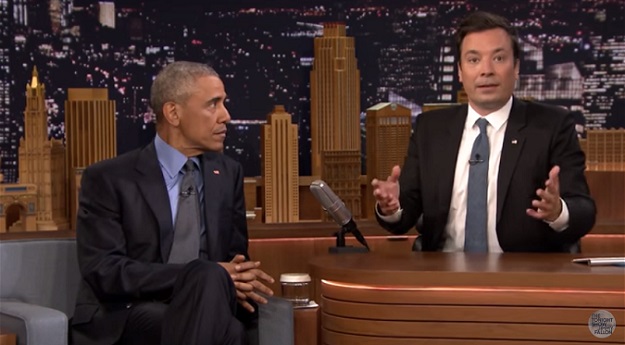 Barack Obama may be the most powerful man in the world, but his smartphone game is in need of repair. In fact, the smartphone you currently have in your pocket is probably more advanced than the one he’s using. During an appearance on The Tonight Show Starring Jimmy Fallon yesterday, Obama said that while he has a smartphone of sorts, its functionality is extremely limited due to security concerns.

So while we’re all busy tweeting, texting, taking photos and more, Obama remains stuck on the sidelines. In an amusing anecdote, Obama recalled the conversation that accompanied him receiving his new phone, with his handlers saying “this is a great phone, state of the art, but it doesn’t take pictures, you can’t text, the phone doesn’t work, and you can’t play your music on it.”

Essentially, it sounds like a flip-phone from 2003. Laughing about it, Obama even compared it to a 3-year old’s play phones.

“I’ve been seeing Malia and Sasha doing all this and Michelle’s got three of them, she’s texting and all this,” Obama said.

As perhaps the first tech-savvy President the United States has ever seen, President Barack Obama’s tech allegiances have long been subject to speculation and intrigue. On the hardware front, we know that Obama, during the build-up to the 2008 election, was partial to MacBook Pros. We’ve also seen photos of Obama toting around an iPad over the last few years.

But when it comes to Obama’s smartphone of choice, well, the situation has always been a bit murky. Going back a few years, Obama was an admitted BlackBerry fanatic. In fact, Obama even fought a hard-nosed battle with the powers that be in order to keep his BlackBerry once in office. But much like his current smartphone, the BlackBerry he was allowed to use was severely stunted functionality wise.