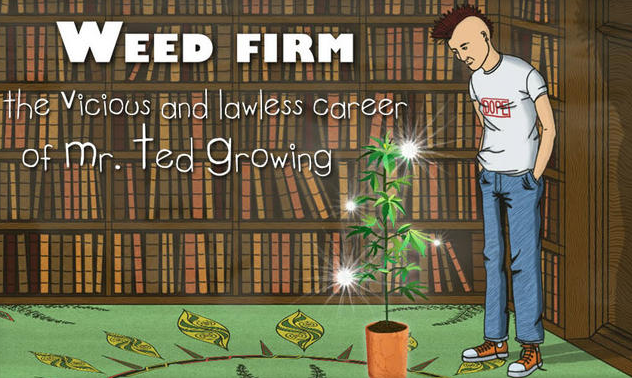 This week, Apple had enough — according to CNET, it has yanked Weed Firm from the App Store. It’s quite possible that Apple has allowed various weed-themed apps to flourish as long as they don’t attract too much attention. But after the rising tide of grimy, low-class apps pushed Weed Firm to the top of the iPhone download parade, something had to be done.

It is quite interesting how rapidly the mood and tone of the App Store shifts. Just a couple of months ago, the iPhone chart was dominated by cheerful, childish Flappy Bird clones that took up as many as half of the top 10 slots. These  simple and colorful games were defined by bright colors, early 80’s graphics and naively drawn backgrounds and characters.

This era of innocence has abruptly shifted to the snickering toilet humor and nihilistic Tampa strip mall noir stylings of Make It Rain, Toilet Time and Weed Firm. This dirty triplet climbed the charts simultaneously and seems to have created a positive feedback cycle where consumers intrigued by one of them decided to sample all of the apps, one after another.

It will be interesting to see whether the trend survives Apple’s countermeasure and how developers find ways to skirt App Store rules in depicting drug scenes, criminality and scatological situations.