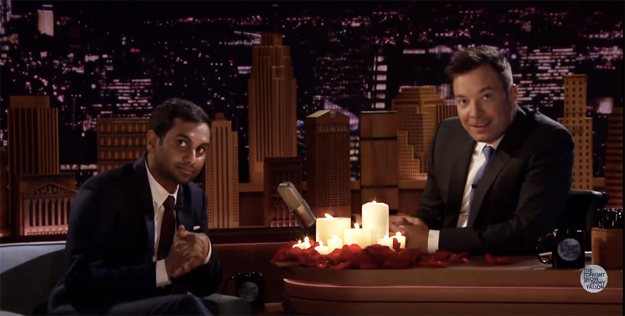 I am not a fan of The Tonight Show with Jimmy Fallon. In fact, I sort want to live in a world where I never have to see Jimmy Fallon’s face again. I can still appreciate some of the bits on the show, though — especially when the always-hilarious Aziz Ansari is involved.

Parks and Recreation’s run is over but Ansari remains one of the hottest comics in the business right now, and he went on Fallon’s show on Tuesday night to promote his new book Modern Romance. His book examines young people’s’ dating habits, and it includes a section that analyzes some actual first texts sent to women by men looking to start a conversation.

On the Tonight Show, Ansari and Fallon set the mood and read some of them. They were pretty hilarious.

“It was really surprising, the kind of bozo texts a lot of dudes send,” Ansari said on Fallon’s show. “It seems like a very simple thing to say, ‘Hey would you like to do this specific thing at this specific time, you were nice.’ But most dudes are writing very weird things, or just saying ‘Hey.’ “

Thankfully, the examples included in the bit are much funnier than just “hey.”

The full segment can be seen in the video embedded below.