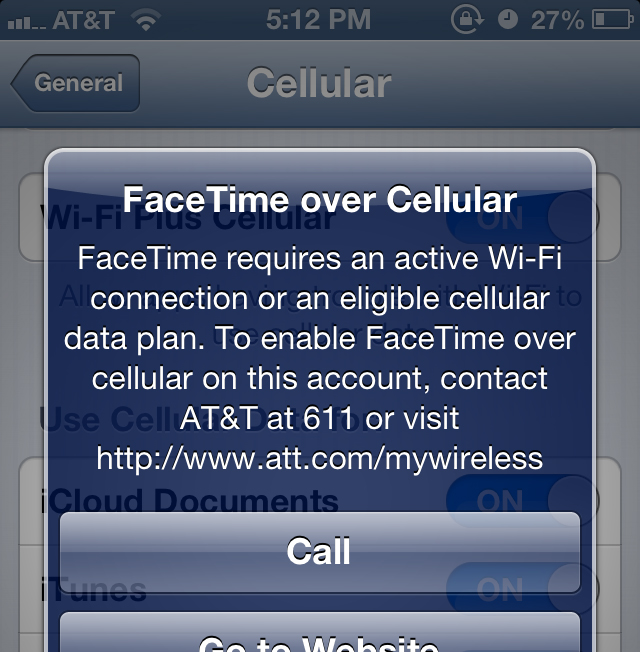 Rejoice, AT&T (T) iPhone subscribers: You no longer need to have a shared data plan or an LTE-capable iPhone 5 to use FaceTime over the company’s cellular network. AT&T announced on Wednesday that customers who own an HSPA+ compatible iPhone and subscribe to any tiered data plan can now use the carrier’s HSPA+ network to use Apple’s (AAPL) popular video chat application. AT&T says that it has “already begun updating our systems and processes and expect to start rolling the update out to customers on an ongoing basis beginning in the next couple of weeks.” The carrier first announced that iPhone 5 users with tiered data plans would be allowed to use FaceTime over its LTE network this past November. We’ve posted AT&T’s full press release below.

January 16, 2013 — When FaceTime over Cellular launched in September 2012, we explained that we wanted to roll it out gradually to ensure the service had minimal impact on the mobile experience for all of our customers.

As a result of ongoing testing, we’re announcing AT&T will enable FaceTime over Cellular at no extra charge for customers with any tiered data plan using a compatible iOS device.

Of course, FaceTime over Wi-Fi remains available for all customers who have a compatible iPhone or iPad.

We have already begun updating our systems and processes and expect to start rolling the update out to customers on an ongoing basis beginning in the next couple of weeks.  Customers do not need to do anything—the update will be applied automatically over the next few months.

Only AT&T offers benefits like the ability to talk and surf at the same time, the fastest download speeds using AT&T 4G LTE, and a variety of flexible plan options to meet customers’ needs.