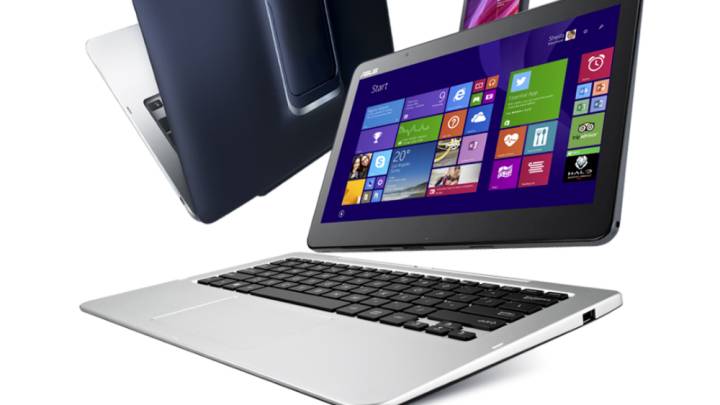 Remember the Asus Transformer Book Duet? Asus imagined a dual-booting Android/Windows tablet/laptop that would offer users four independent modes, and switch between the two operating systems in just four seconds, and demoed the concept at CES 2014. However, following pressure from both Google and Windows, the device never saw the light of day. Both companies reportedly insisted that their partners do not release such dual-booting devices, but it looks like Asus is not ready to give up.

The company on Monday unveiled new products at Computex 2014 – part of the company’s “ultimate digital life for consumers,” – including a device that runs both Android and Windows and has five different modes: Windows tablet, Windows laptop, Android smartphone, Android tablet and Android laptop.

The Transformer Book V is “the world’s first five-mode, three-in-one converged laptop,” which packs a standalone 5-inch ZenFone 5-like smartphone that docks inside the tablet part of the device just like other similar Asus PadFone products. Both the smartphone and laptop/tablet combo are based on Intel processors, with the former being powered by a 64-bit quad-core Intel Atom Moorefield chip.

The smartphone has 2GB of RAM, 64GB of storage, 8-megapixel rear-facing camera, 2-megapixel front-facing camera, LTE support, 2500mAh battery, and Android 4.4 KitKat under the hood. When docked, the Android interface appears on the screen, inside Windows 8.1.

However, pricing details and release dates aren’t available for this product, so it may be a while until Asus actually manages to launch such devices.