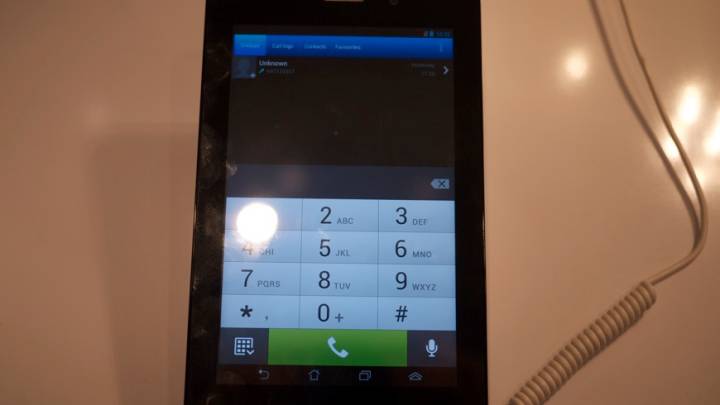 Why? Seriously, Asus (2357). Why? This question bears asking, as going hands-on with Asus’ new Fonepad truly requires some big hands. Single-handed operation is a thing of the past. Remember when diminutive phones were the latest trend? When iPod grew smaller and smaller and RAZRs got thinner and thinner? Wave goodbye, dear friends. That age is long gone.

To be fair, the Fonepad is a great tablet. For $249, you get a full-featured and powerful 7-inch device with a 1.2GHz Atom Z2420 processor, 1GB RAM, 8GB of onboard storage (with models sporting up to 32GB available), a front-facing 1.2-megapixel camera and a 3-megapixel rear camera. In practice, operation is seamless and smooth. No complaints in the performance department, though the 7-inch WXGA display does leave a bit to be desired.

That Asus can design and bring to market a high-quality affordable tablet is a foregone conclusion. We already have, and love, the Nexus 7. Why, then, would the company move to introduce another device so similar to its popular Google-branded Nexus?

The Fonepad is the answer to a question no-one asked: What would happen if you turned a Nexus 7 into a phone?

The hallmark feature here is that the Fonepad allows the user to make calls. Never mind that holding this thing up to your ear runs the risk of blocking out any/all ambient light in the room, never mind that the microphone lays approximately 7-inches below the speaker, and nevermind that we can’t think of a single living, breathing human who would ever consider replacing his or her existing mobile phone with something of this size. The Fonepad is a phone, and ASUS expects you to use it as such.

In a world where companies like Samsung (005930) and Nokia (NOK) are (over)using the word “human” to described their design language, Asus (and Samsung with its Galaxy Note 8.0, but that’s another story entirely) has opted for a decidedly inhuman approach to its newest device.

The Fonepad is not a bad tablet. As a matter of fact, for $249, it’s a pretty decent tablet, ignoring for a moment, if you can, the fact that a nearly identical Nexus 7 can be had for $199. The problem is, it’s a terrible phone.