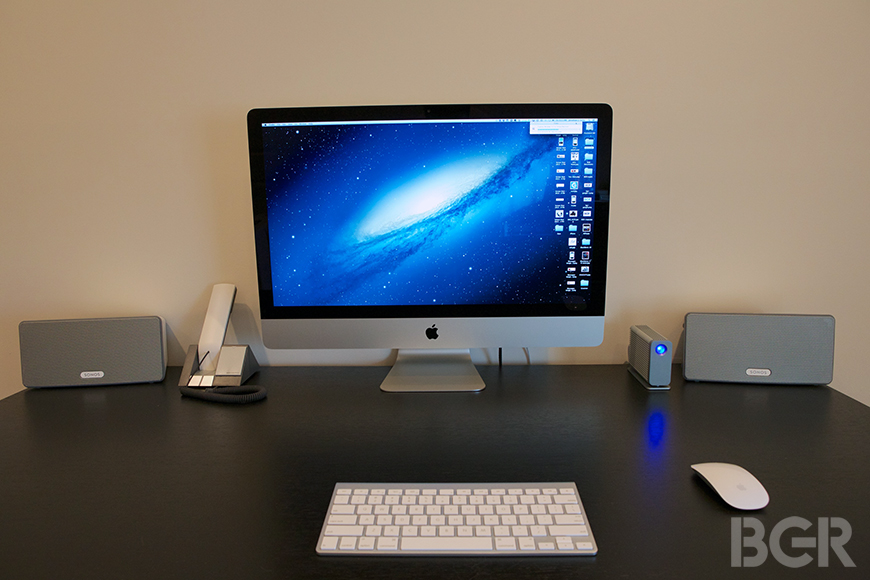 Apple’s (AAPL) iMac has been the star of the all-in-one desktop category ever since it made its debut in 1998. Over the years, Apple has taken their usual strategy of refinement and churned out some of the  best desktops in the world — forgetting the iMac G4. The iMac itself hasn’t changed too much since Apple settled on a size and shape. First it was white glossy plastic, then alunimum. But for the last while, you’d hardly be able to tell the difference between a new iMac and one from 2007. This year, however, Apple brought to market a brand new iMac, one with 5 milimeter thin bezels, an amazing laminated display which finally reduces all of the glare and reflections of the screen, and advancements in hard drive storage with the Fusion drive. Even Apple’s packaging has got smaller, lighter, and better.

Speaking of lighter, the new iMac is considerably lighter than before, and yes it’s supposed to sit on your desk, but its lightness lends itself to more work environments and situations. After transferring my old data over a Thunderbolt connection, I soon realized something… not only was the new iMac quieter, but it is not noticeably hot. My previous iMac would get to the point of burning if you touched it towards the top where the fans are, and it looks like Apple’s been able to fix these two issues by corralling all of the components in the center of the back case. Speaking of components, the new 2013 27-inch iMac features the latest third-generation Intel Core i7 processor, and the ability to expand the memory to 32GB of RAM, making this the fastest computer I have ever used. Combined with the Fusion drive — a solid state drive and a traditional hard drive — you have the speed of disk reading and writing with the computing power of some of the fastest processors with more memory than you can take advantage of in the most elegant and slim all-in-one packages. Apple’s display also gets a bump thanks to its optical lamination that reduces the air gap between the front glass surface and the screen itself, this brings the display right to the surface like your iPhone 5, while reducing glare by 75%. My iMac is no longer like a mirror in my sun-filled office.

In short, there’s not even a worthy alternative to Apple’s iMac if you’re looking for an all-in-one computer. The 21-inch model starts at just $1,299 and the 27-inch starts at $1,799. Both are shipping now with a couple weeks waiting time.