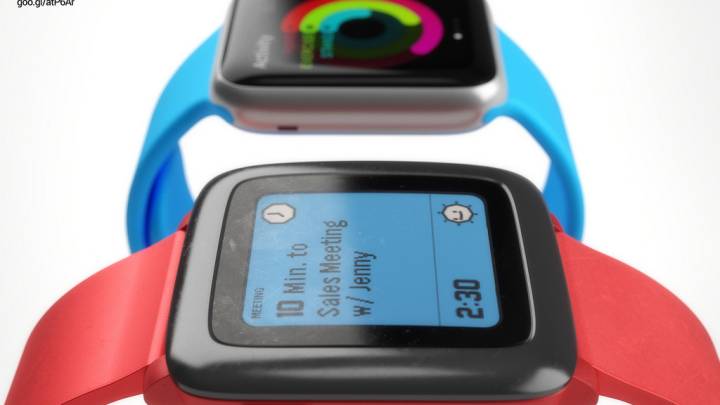 As the fastest funded project in Kickstarter history, having raised over $1 million in less than an hour, it’s not as if the new Pebble Time Kickstarter needs an infusion of money. As it stands now, the campaign already has over $18 million in funding from over 72,000 backers.

Still, with the Apple Watch dominating the tech news cycle last week, the focus on Apple’s upcoming wearable had a discernible impact on the interest in and funding of Pebble’s already wildly successful Kickstarter campaign.

The new smartwatch from the smartwatch pioneer was drawing in funding at a rate of around $6,000 per hour on Sunday, March 8, which rose to $10,000 per hour on Monday, March 9 (when the event took place), and capped out at $16,000 per day on average during March 10, the day following Apple’s press presentation.

Further, when Pebble CEO Eric Migicovsky was asked about the impact of Apple’s watch event on the Pebble, he said that interest doubled.

I asked Eric what happened to the rate of Pebble’s Kickstarter signups after the Apple Watch announcement. He said it doubled.

So while some of the more traditional players in the watch industry are either wary or dismissive of Apple’s foray into the watch market, Pebble, to its great credit, welcomes it.

“When the biggest company in the world enters your market, that’s the kind of validation you can only dream of, ” Migicovsky expressed in a statement to TechCrunch. “Ultimately the more awareness for smartwatches, and the more choice for consumers, the better for everyone. 2015 is going to be an extraordinarily exciting year.”

A rising tide lifts all boats, as the saying goes.

To date, Pebble has already sold over 1 million smartwatches. Once the Apple Watch launches, it’ll be interesting to see how quickly, or perhaps slowly, Apple reaches the 1 million sales threshold.