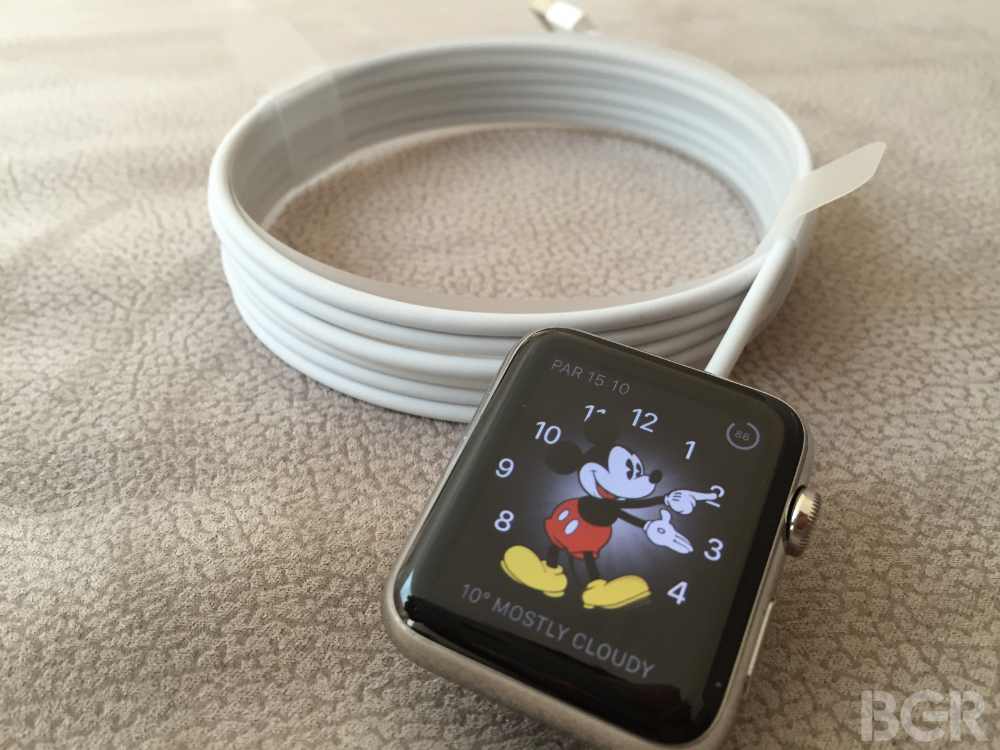 After a lot of trouble last week, I managed to buy an Apple Watch on launch day – I got a 42mm stainless steel Apple Watch with white Sport band on Friday from Colette’s, after spending some nine hours in line.

Since then, I have tested the Watch’s features in all sorts of daily routines, including battery life, and I have to say my experience has been surprisingly good – so read on to find out how I deal with charging it every day.

Let’s start with what Apple is saying about the Watch’s battery life. On a special page on its website, the company lists battery performance for the 38mm models for a variety of situations. The smaller Watch should last for 18 hours of all-day activity, up to 3 hours of continuous talk time, up to 6.5 hours of continuous audio playback or workout, up to 48 hours of time checking, and up to 72 hours in Power Reserve mode which only shows the time.

I tested battery life just like any other user would: I took out the Watch from its box, paired it with the iPhone, and started using it without making any changes to its default settings. Yes, there are things you can do to improve battery life, but that’s going to be the topic of a different post in the future.

And the results were very interesting.

On first day of use, with a 73% out-of-the-box charge, my 42mm Watch lasted for 19 hours and 18 minutes (left screenshot below). After the first charge that I performed with an external battery during a train ride, the Watch lasted for 32 hours (sadly I did not grab a screenshot for that one). I then charged the device using the power adapter that came in its box plugged into a regular wall socket, and it lasted for 25 hours (right screenshot below). For the third charge, I connected the MagSafe inductive charger to my MacBook.

Obviously, there’s no connection between the way you charge your Watch and how long it’s going to last, or not one that I can discern. My point is that you have various ways of charging the device during a regular day, and that you’re likely you’re going to have to do it every day. In each of these three different instances, the Watch needed up to three hours to reach a full 100% charge, so it’s not clear to me yet which charging method is the more efficient.

However, for some reason, the Watch would stop charging from time to time when used on the external battery or with the default charger, something I discovered accidentally while performing my charge on the train. It’s worth pointing out that the Watch stayed firmly in place on its MagSafe inductive charger at all times while charging.

My quick fix for that was either removing it from the MagSafe charger and placing it back on, or turning on and off the external battery. It might be also be a good idea to remove the Watch bands while it’s charging so they don’t interfere with the Watch’s position atop the charger.

As you can see, the Watch is already able to offer better battery life than what Apple is promising and that’s without performing any special tricks to prolong it. But you’ll have to charge it either at night or during mornings to make sure it won’t die on you after a full-day of use.

I used the Watch constantly during this time, even more than I’ll use it in the future, as I was also learning more details about all its functions. I received plenty of notifications from a variety of apps, I played with default Apple apps and third-party apps, I used it for various workout sessions, I used it while showering and while doing stuff around the house, I used it as a phone and as a remote for taking pictures, I used it to wake me up in the mornings, I tested Siri, I explored Force Touch gestures and I had it connected to the iPhone at all times. And yes, I constantly checked the time, so the screen would keep turning on.

I never enabled Power Reserve mode, which is just a button press away (the power button under the Digital Crown is a quick way to get you there), not even when the 10% threshold warning came up. Furthermore, I left on and at default levels all sounds and vibration patterns, to eat away battery life in regular fashion, at full force.

At some point during testing I realized that using the Watch to keep up with notifications, and only turning on the iPhone for specific things, other than checking time and notifications, might save me iPhone battery life but I have not tested my assumption with specific iPhone battery tests. Then I found out some Watch users are experiencing battery life issues with the iPhone and checked my iPhone 6 to see if that’s the case.

Some pointed out that the culprit might be the Watch app in iOS 8.3, something I also used very frequently on the iPhone in my quest to find out everything there is to know about the device. To my surprise, the Watch app is responsible for just 4% battery drain on the iPhone 6 over 24 hours or 2% over the last 7 days, though I only used the Watch for five days of those, (see image below).

Other issues that may have affected iPhone battery life in my case may have been my constant traveling that included looking for a signal while roaming.

The annoying problem remained that I have to pack an Apple Watch charger with me at all times. Other than that, I didn’t really have to deal with any other battery-related issues and I haven’t even started tweaking settings to try making the battery last even longer.

However, 9to5Mac points out that there are Watch users that experience significant issues with charging the battery of the device, while others have encountered a different phenomenon: Faster battery draining on an iPhone that’s paired with the Watch. Apparently, Apple is already aware of the issues, and it’s looking at solutions for affected users .

Some of the simple things you can do to fix charging problems include restarting the Watch or resting and setting it up again. In other instances, hardware issues may affect your Watch, in which case Apple will replace the Watches or the charging cables.

More details about these problems can be found over on Apple’s discussion forums at this link.