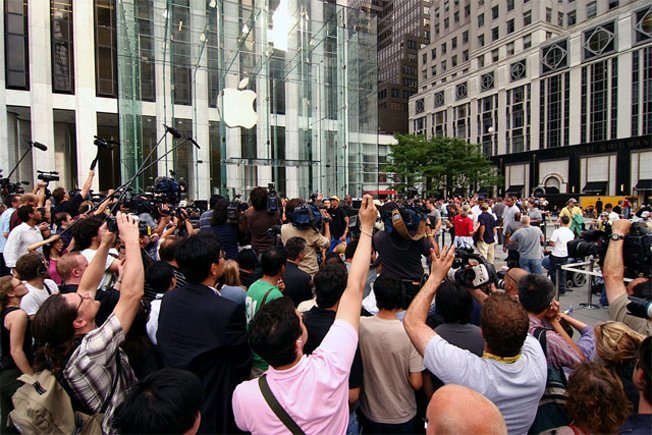 People don’t just love new Apple (AAPL) devices; they also love Apple Stores – so much so, that throngs of people are willing to wait hours to be among the first to get free t-shirts at grand openings. With 395 stores worldwide in 14 countries and each store estimated to generate around $6,050 per square foot, Apple’s got a winning formula for retail success. In a new internal video discovered by 9to5Mac, Ron Johnson, former senior vice president of Apple Retail and Bob Bridger, vice president of Apple Retail Development explain what makes Apple Stores so popular. Hint: it’s not just because of the beautiful glass windows.

Produced by Washington Square Films, the internal video emphasizing the specialness of Apple’s retail stores was only ever shown to Apple Store employees. In the video, Johnson says that all of Apple’s stores have the same elements in terms of having sections for different products, but what makes the Apple Stores unique is their location – “typically the most important in that city.”

Once a location is picked, it’s all a matter of working towards making sure the store has an inviting appeal that matches it surrounding culture and environment. It’s about “getting out into the street and feeling what the local feels,” says Bridger.

“Half of the physical space is devoted to ownership,” explains Johnson. Ask any person who has ever gone in an Apple Store and they’ll tell you all about the Genius Bars and enthusiastic-smiling employees. Apple Stores have a sense of community that other retails do not.

“Most retailers view their space as the square footage they rent,” says Johnson. “We view our space as the environment we inhabit.”

Apple’s internal video on the philosophy of its retail stores follows below.