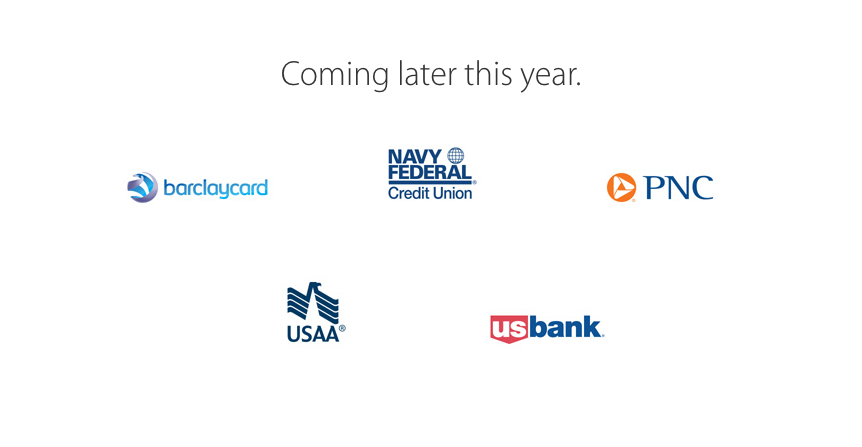 Apple Pay launched to great deal of fanfare last month, but it was only the beginning of what Apple hopes will be a continual rollout of new partners and features for the payment service in the coming months and years. In fact, it appears that the second wave of banks has already started to go live, as MacRumors notes that Navy Federal Credit Union, USAA, US Bank and PNC Bank cards are now compatible with Apple Pay.

All four of these are currently listed on the Apple Pay landing page as “coming later this year,” but Navy Federal Credit Union announced availability of the service on Monday via a press release:

“We’re excited to make this new service available to our members starting today,” said Randy Hopper, vice president of credit cards and business optimization at Navy Federal. “Our members live fast-paced and mobile lives. And, they have enthusiastically adopted our mobile banking solutions. Now, with Apple Pay, they’ll be able to save time when shopping while having a safe and easy payment experience.”

USAA had previously stated that Apple Pay would be available starting on November 7th, but several Reddit users are reporting that USAA also went live on Monday. US Bank and PNC Bank members have also been able to add their cards to Apple Pay, despite the fact that neither bank has made an announcement about the service.

MacRumors has also found evidence that Apple Pay is going live for Barclaycard, M&T Bank, Regions Bank, Zions Bank, Renasant Bank and Keesler Federal Credit Union. Phase two of Apple Pay might not be quite as exciting as the next phase of Marvel movies, but it’s sure to make a lot of iPhone 6 owners very happy.