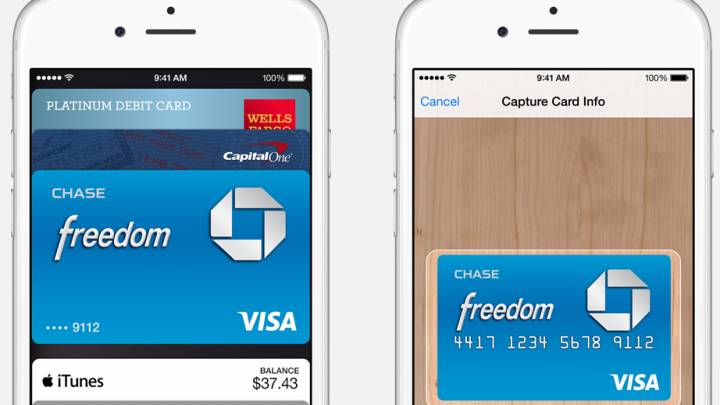 One of the major new products Apple introduced during its Tuesday iPhone 6 event is Apple Pay, its very own NFC-based wireless payments system that’s going to be available starting in October. The iPhone and Apple Watch payment solution seems awfully easy to use, with Apple also focusing on shopping privacy and financial security in addition to stupid-simple functionality. Before you embark on your next Apple Pay wireless shopping spree though, make sure you know everything there is to know about this new Apple product.

What hardware do I need?

The first devices to support Apple Pay will be the iPhone 6 and iPhone 6 Plus (starting next month) that come with built-in NFC support and Touch ID fingerprint sensor, as well as the Apple Watch (in early 2015), at which point Apple Pay will also work on older iPhones that are compatible with the wearable device, including the iPhone 5, iPhone 5c and iPhone 5s.

What about the software?

Credit and debit cards will be stored in Apple’s existing Passbook iOS application, following an iOS 8 update in October, with Apple Pay automatically selecting the default card when in proximity of an NFC in-store terminal. Adding new cards will be as easy as taking a picture of a physical card to have it then stored in Passbook, or simply enabling the card that’s already setup in iTunes for wireless payments.

In supporting stores, users will be able to wirelessly pay for goods by approaching their iPhone 6 model or Apple Watch to the payment terminal that supports NFC connectivity, at which point the default credit card will appear on the screen (the user will be able to choose a different one if needed). On the iPhone 6, a touch on the fingerprint sensor will approve the transaction, while on the Apple Watch, a tap on the button next to the Digital Crown will do the trick. In each case, the device will offer a tactile feedback that confirms the payment.

A video showing how simple Apple Pay transactions are supposed to be is available at this link.

Apple is employing various layers of security, some more obvious than others.

For starters, the financial information is stored locally on the device, in its secure element, and does not reach Apple’s servers. Furthermore, during transactions, instead of the device transmitting card numbers to the receiving terminal, it’ll only send over a Device Account Number for each card and a “transaction-specific dynamic security code.” Moreover, Apple will not store purchases history on any devices or in the cloud, and only provide the user with a recent transactions list for convenience purposes.

On top of NFC, there’s a second security measure in place, and that’s biometric identification. On Touch ID-enabled devices such as the new iPhone 6 models, users will have to approve purchases by placing their finger on the scanner. On the Apple Watch, a PIN number has to be entered every time the device is removed from the user’s hand – continuous skin contact means the device doesn’t have to be authorized a second time by the user via a PIN security code.

Thirdly, because card data is stored on the device, the user isn’t actually sharing the physical card with store employees, which means they won’t have access to the data on the card.

What cards are accepted?

So far, Apple announced that all Visa, MasterCard and American Express cards coming from various banks including American Express, Bank of America, Capital One, Chase, Citi and Wells Fargo will support Apple Pay, with Barclaycard, Navy Federal, PNC, USAA and US Bank to follow.