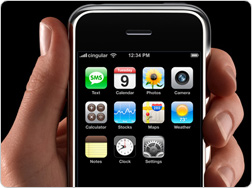 The New York Times is reporting that Apple will release a software development kit for the iPhone at next week’s Worldwide Developer Conference. The thought of having 3rd party apps on the iPhone has seemed to freak Jobsians out, but it looks like this, which will use OS X to port applets directly to the uber-toy, is at least some kind of consession for those craving 3rd party friendliness. The paper didn’t indicate many more details, simply citing a person close to the development of the iPhone, that it: “intends to announce that it will make it possible for developers of small programs written for the Macintosh to easily convert them to run on the iPhone.” We can all return to the deep conversation with our $600 that’s been ongoing since January.