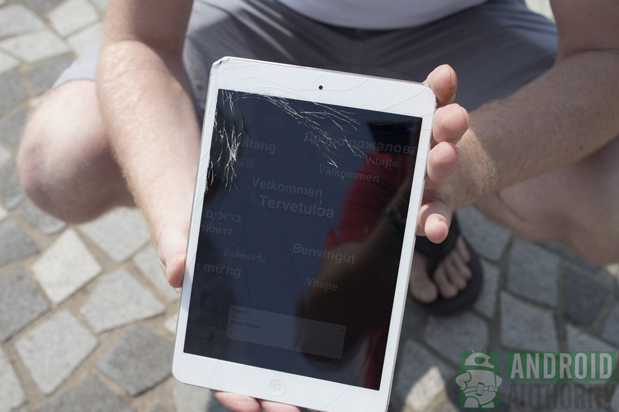 Whether you’re buying an iPad mini for yourself or as gift for someone else, the last thing you want to do is accidentally drop your new $329 tablet. But for people curious about how strong Apple’s (AAPL) new tablet really is, Android Authority grabbed a new iPad mini and new Nexus 7 and pit them against each other in do-or-die drop test. When dropped on its side from about four feet off the ground, the iPad mini suffered two small dents on its corners and the Nexus 7’s display shattered in its corner with a few pieces of plastic falling off.

Dropped on its back, the iPad mini received a fractured screen, but the device still worked. As for the Nexus 7, its screen shattered even more and the device was unusable, even though it did power on.

For the final test, AA dropped both tablets with the displays facing downward. Surprisingly, even though the iPad mini shifted and fell on its sides, the tablet still worked, again. The Nexus 7 was already destroyed in the last round, but was subjected to another drop on its face and as you’d expect, it didn’t return from the dead.

The final conclusion: the iPad mini is one tough tablet thanks to its aluminum casing.