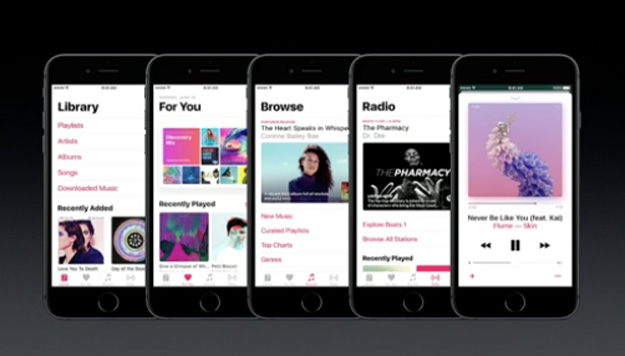 Apple today introduced iOS 10, an update it calls the ‘biggest release ever.’ All told, Apple highlighted 10 new iOS 10 features that we can look forward to later this Fall. Without question, Apple has rethought the entire user experience from front to back.

Second, Apple announced that it’s finally opening up Siri to developers, corroborating previous rumors in this regard. Some of the apps planning to add Siri integration include Slack, WhatsApp, Uber, Lyft, Pinterest, MapMyRun, Square, Skype, Vonage and more.

Fourth, Apple introduced new features to its Photos app, including facial recognition. And not to worry, Apple executive Craig Federighi said that “it’s all done with your privacy protected.” Additionally, Federighi said that Photos will feature object and scene recognition. There’s also an advanced search feature that lets users search for specific people, objects or places. Admittedly, this isn’t new to the mobile space, but it’s nice to see it finally come to the iPhone. Notably, all of the AI work Photos does is local to the device, which is to say Apple isn’t keen on learning about who you are and where you go a’la Google. There’s also a new Photos tab called ‘Memories.’

Fifth, Apple introduced a complete revamp of its Maps app. Not only has the overall UI been improved, but users can finally pan and zoom when the app is in navigation mode. A seemingly small detail, this has long been one of the most frustrating aspects of using Apple Maps as opposed to, say, Waze. Apple’s new Maps app is also designed to provide users with more suggestions regarding places to go and things to see. And not only that, Apple, in keeping with the theme of the evening, is opening up Apple Maps to third party developers.

Sixth, we have Apple Music which is also being given a nice new redesign that looks much simpler and straight forward to navigate. The new Apple Music also brings lyrics to songs, a simple yet extremely nice addition. Much like the comparison between WatchOS 3 and the original, this new version of Apple Music is what the original incarnation of Apple Music should have been. Still, it’s better late than never. As a final point, it’s worth noting that Apple Music now boasts more than 15 million subscribers. That’s a cool $150 million in revenue into Apple’s pockets each and every month.

Seventh, Apple introduced a new redesign for its News app. Much like the Apple Music redesign, everything looks just a tad bit more intuitive and sleeker.

Moving right along to the eighth tent-pole feature of iOS 10, we have a new app called Home. As previously rumored, Home effectively serves as a centralized location for a user to control any of their smart home connected devices. Conveniently, the Home app can even be accessed from iOS 10’s slightly redesigned Control Center.

And last but not least, we have some big changes regarding iOS’ Messages app. The new Messages app will introduce support for rich media links, bigger emoji, and emoji predictions (something which Google’s Gboard already has). iOS 10 will also introduce Bubble Effects — a feature which lets users adjust the size of the chat bubble — and invisible ink which lets users send surprise messages which only reveal themselves once a user swipes across the chat bubble. The new Messages will also allow users to respond via Digital Touch messages, tapback icons and more. Without question, Apple is finally catching up to some other popular messaging apps out there.

But we’re not finished just yet, users can even send playable Apple Music links right in Messages. Further, Apple is opening up Messages to third-party developers.

As far as release dates are concerned, a developer preview will be available today, followed by a public beta in July and an official release this fall.

Check out our  WWDC 2016 hub for all the latest news from Apple’s big developer event.