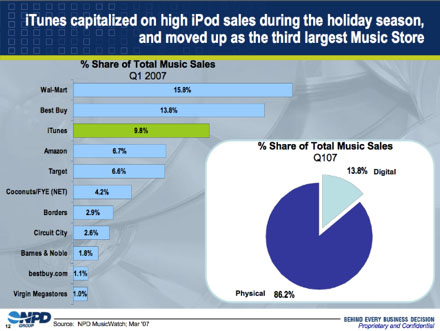 In a survey of 40,000 people 13+, done by the NPD Group, Apple has surpassed Amazon.com to become the 3rd-largest music retailer in the U.S. They’ve now taken a decent sized chunk of space in that world, gobbling up almost 10%, while leaders Wal-Mart and Best Buy sit at the top with 15.8% and 13.8%, respectively. Interesting to note is that digital music only took up 13.8% of the total share, which is where the now-third-place iTunes gets their juice from. Amazon.com has begun selling DRM-free music digitally, but with Apple adding iTunes Plus, accomplishing essentially the same thing, it seems unlikely that it will be enough to allow Amazon to reclaim its position.