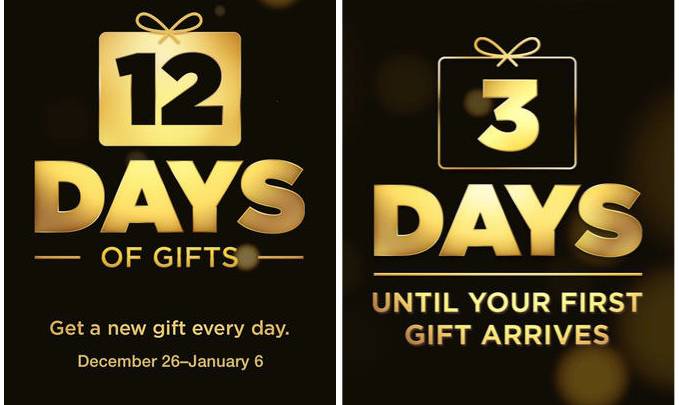 Apple’s “12 Days of Gifts” iOS app that was available in previous years only to customers in international markets including Canada, Europe, and other countries, is for the first time ever offered to U.S. iPhone, iPad and iPod touch owners as well, MacRumors reports. The application has been updated in time for this year’s holiday promotion and will offer users a different free download each day from December 26th to January 6th, including apps, movies, songs, books and others. However, each item will only be available for download for 24 hours, not for the entire duration of the promotion. At this time, it’s not known what free downloads Apple has included in the 2013 version of the app.

“12 Days of Gifts” is available in the App Store as a free download, and requires iOS 7 or later to run – that means users that have access to the app but aren’t yet on iOS 7 (about 25% of total iOS device owners still run an older iOS version according to recent reports) will have to first update their devices in order to get the app. Additionally, Apple also has another free content promotion going on in the Apple Store app in time for the holidays, as the app offers users eight free Christmas songs.

While Apple will offer only free digital content for 12 days in a row, Microsoft plans to offer U.S. customers that visit its stores “12 Days of Deals” on gadgets. SlickDeals on Monday has published an alleged Microsoft document that lists the alleged deals. According to it, from December 9 to December 20, buyers will be able to purchase various gadgets and accessories for a discounted price. Apparently each day will have a doorbuster offer available to the first 20 buyers, and a daily deal offer available to everyone else.

Meanwhile, Microsoft has confirmed the “12 Days of Deals” promotion, putting up a special page dedicated to it in its online store. Here’s what included in the promotion, according to the leaked document

The leaked Microsoft document follows below.