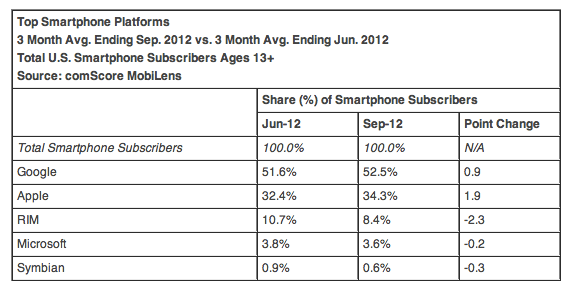 The latest numbers from research firm ComScore reveal the difficulties both Microsoft (MSFT) and Research in Motion (RIMM) face when deploying their new mobile operating systems. Windows Phone 8 handsets are just around the corner and the first BlackBerry 10 devices are slated to arrive for early next year, however it may be too late. In a three month period ending in September, ComScore found that Android and iOS were the only two operating systems to increase their market shares and have continued to dominate the mobile industry.

The research firm also found that smartphone penetration in the U.S. for the first time ever past the 50% threshold. For companies other than Samsung (005930) and Apple, however, the U.S. still remains a difficult market to break into.