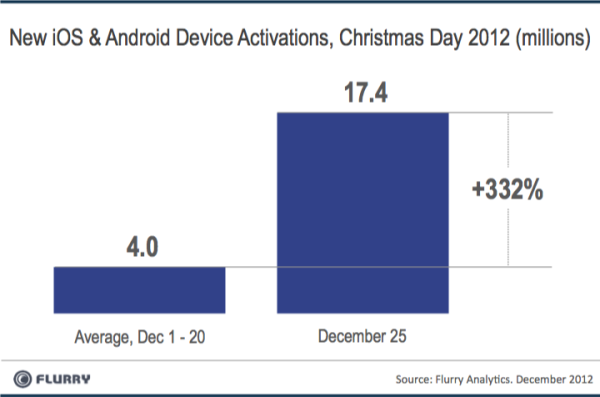 More Android and iOS devices were activated on Christmas Day this year than on any other day. According to analytics firm Flurry, 17.4 million Android and iOS devices were activated during the holiday, an increase of 332% compared to an average of 4 million activations per day. This year’s numbers were found to be more than two and a half times larger than Christmas Day last year, which saw 6.8 million devices activated. Once their smartphones and tablets were turned on, consumers collectively downloaded 328 million applications.

Interestingly, Flurry found that for the first time ever, more tablets (51% of all activations) were activated on Christmas than smartphones (49% of all activations). The big winners were said to be Apple’s (AAPL) iPad and iPad mini, and Amazon’s (AMZN) 7-inch Kindle Fire HD tablet.

The firm notes that “Amazon had a very strong performance in the tablet category, growing by several thousand percent over its baseline of tablet activations over the earlier part of December.”