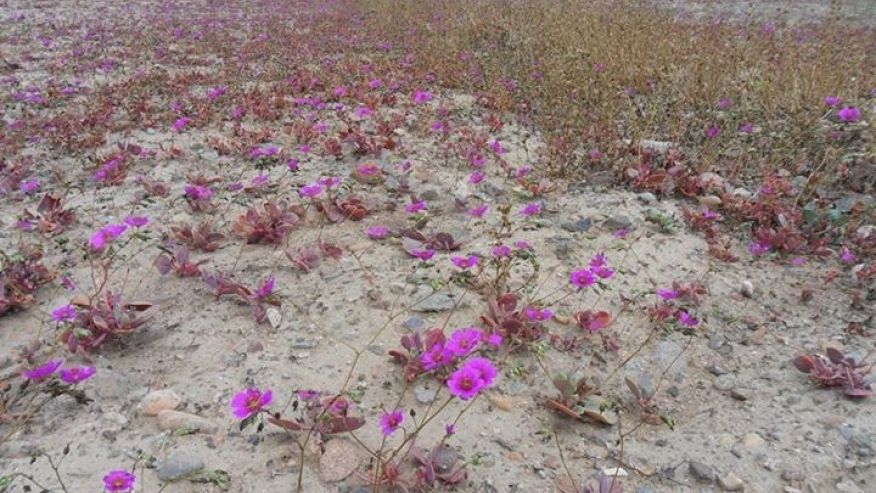 A Chilean desert is ablaze in purple, bright pink and white, courtesy of wild flowers that bloomed following deadly floods in the South American country.

The floods in March killed as many as 28 people and sparked widespread mudslides. But within weeks, the normally barren landscape of the Atacama desert was transformed into a carpet of flowers.

“The Atacama region was punished, but also blessed by the phenomenon of a flourishing desert, something that happens only after the rains, this time brought about by El Niño and climate change,” Daniel Diaz, National Tourism Service director in Atacama, told EFE, the Spanish news service.

The floral explosion is a bonanza for the battered region, with tens of thousands of tourists flocking to the region to catch a glimpse of a phenomenon that is happening for a second time this year.

“The intensity of blooms this year has no precedent,” Diaz said. “And the fact that it has happened twice in a same year has never been recorded in the country’s history. We are surprised.”

This year’s El Nino is expected to be one of the strongest on record, already blamed for widespread flooding in South America. El Niño – meaning in Spanish “the little boy, or Christ child” – is created when the equatorial waters of the Pacific Ocean warm significantly.

“It is a unique experience and we take the opportunity to document the ecosystem’s dynamics, to observe how flowers live and to catalog them,” tour guide Rodrigo Arcos told EFE.

Atacama made headlines around the world in 2010 when 33 miners were trapped underground for 69 days, inspiring the movie “33.” It also hosted a route in the Dakar rally in recent years.