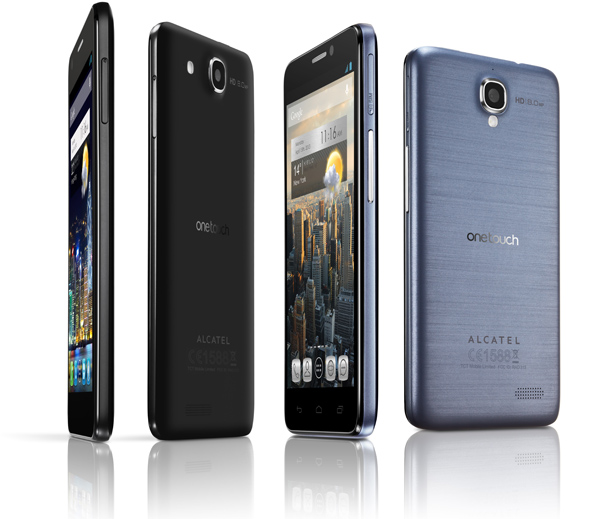 TCL Communication’s (2618) Alcatel One Touch brand is ostensibly unknown in the United States, but the company is looking to make a name for itself at this year’s Consumer Electronics Show. Alcatel One Touch has a number of new devices debuting at CES 2013 and to start things off, the China-based firm has unveiled a trio of intriguing new Android phones.

While the show doesn’t officially begin until Tuesday, Alcatel One Touch got an early start on Monday — likely in order to ensure that it can lay claim to “the world’s thinnest smartphone” for at least a few hours.

The first of three smartphones debuting at CES 2013 is the One Touch Idol Ultra, a sleek Android-powered handset that is just 6.45 millimeters thick. To put that dimension in perspective, the phone is 15% thinner than Apple’s (AAPL) iPhone 5.

Other notable specs include a 4.7-inch HD AMOLED display, a 1.2GHz dual-core processor, an 8-megapixel camera, 1GB of RAM and Android 4.1 Jelly Bean.

Next up is the One Touch Idol, an entry-level version of the Idol Ultra. Measuring a slightly thicker 8.15 millimeters, the One Touch Idol includes a 4.7-inch qHD IPS display, a 1.2GHz dual-core processor, an 8-megapixel camera, 512MB of RAM and the same Jelly Bean OS as the Ultra model.

Finally, Alcatel One Touch has unveiled its first entry into the “phablet” market with the One Touch Scribe HD. This stylus-ready device features a 5-inch HD IPS display, the 1.2GHz quad-core MediaTek MT6589 chipset, an 8-megapixel camera, 1GB of RAM, a microSD slot and Android 4.1. The One Touch Scribe HD also comes in a variety of colors including black, white, red and yellow.

No carrier partners have been revealed at this point in the U.S. or in China.