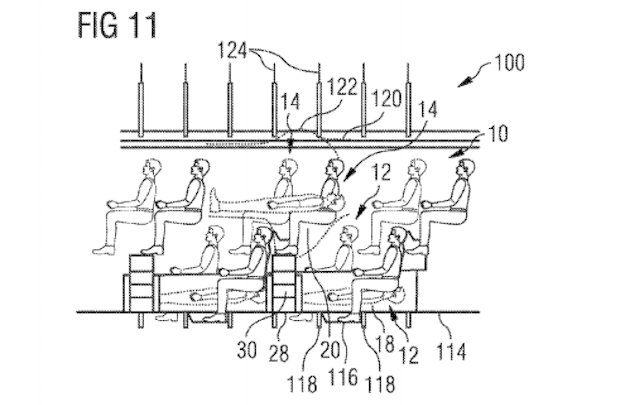 I wouldn’t blame you for reading that headline and thinking to yourself, “Well, this guy’s probably overreacting.” I get it — it can’t be that bad, right? I’ll let you make the decision, because my mind’s made up.

READ MORE: This is why a glass walkway 3,500 feet above ground was a bad idea…

The image you see at the top of this post comes from a patent filed by Airbus at the beginning of the month entitled ‘Passenger Seating Arrangement for a Vehicle.’ After spending the past hour or so staring at it, I haven’t come any closer to deciphering exactly what it represents, other than the last flight I’d ever take.

According to the patent, what we’re looking at is a second, elevated row of seats which would be situated above the first row, effectively stacking passengers on top of one another. But don’t worry:

So not only is Airbus trying to efficiently squeeze as many humans as possible into a giant aluminum tube, they’re also going to give us room to lie down! How thoughtful!

It’s worth noting that an Airbus spokeswoman told the Daily Mail that “Airbus files some 600 patents each year in order to protect its intellectual property. This doesn’t necessarily mean that all of the patents are adopted on an aircraft.” But it’s still terrifying to think that some drew those sketches and thought, “Yeah, this could work.”