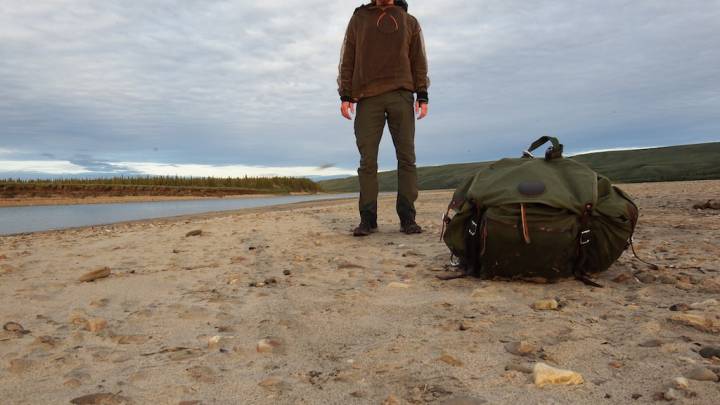 Robert Shuman is the name of a daring 22-year-old man who took on an incredible challenge: paddle 500 miles in the Arctic waters of Canada’s Northwest territories in 50 days… by himself!

Shuman, who took some interesting photos along his journey, told GrindTV he wouldn’t recommend the adventure as a solo project to anyone.

“I was a little foolhardy,” he said after returning home.

He paddled 463 miles in just 23 days, but it all sounds a lot simpler than it actually was. In total, he was gone for nearly two months, during which time he had to adapt to all sorts of living conditions and deal with various challenges along the way. For example, he encountered no less than 13 grizzlies during his trip.

“The first one was within 100 feet of me, waiting on the bank,” Shuman said. “That’s the most scared I’ve ever been in my life. He charged at the water, but it turned out he was bluffing.”

Shuman prepared for a year for the trip, but what he never took into account was the fear that would set in this man-against-nature saga. He trained in primitive wilderness skills at Camp Kooch-I-Ching in Minnesota, and he’s now a senior in recreation and outdoor education at Western State in Colorado.

“I felt like people felt before we had four walls and roof,” he says. “I knew I had to sleep, but I knew I wasn’t necessarily safe.”

“I would get more flustered in the beginning, but over time I learned how to remain calm and how to manage stress,” he says. “What saved me was saying these little gratitude prayers every day, just listing off everything I was thankful for. It’s a practice I had learned before, but here it was so integral.”

“I finally learned to incorporate fear and use it to give me strength and keep me focused and on my toes.”

The paddler chose the Horton River over Anderson River after he consulted with older guys on paddling forums. He started at Horton Lake and ended up at Paulatuk in a trip that spanned Arctic Circle to the Arctic Ocean.

As you can see, Shuman took plenty of pictures during his dangerous adventure – check out the source link for more photos.