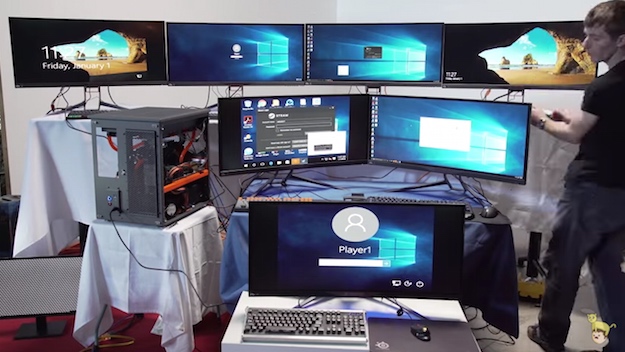 During CES this week, Sony proudly announced that they sold over 5.4 million PS4 units during the 2015 holiday shopping season, bringing the console’s global tally to 35.9 million. Clearly, the PS4 remains the console to beat from a popularity perspective, but if you want to talk about over the top gaming power, you might want to take a look at this nearly $30,000 gaming rig.

DON’T MISS: My picks for the 10 most promising products unveiled at CES 2016

Put together with some sponsorship dollars from Kingston, this rig can run seven versions of Windows simultaneously, each delivering impressively smooth gameplay. As Destructoid quips, this is a “one-machine LAN party.”

The video below, put together by YouTuber LinusTechTips, shows how this monster rig came together while touching on many of the problems that had to be overcome in getting all the disparate parts to work in harmony.

As PC Gamer observes, the real genius behind this expensive setup isn’t simply gathering up and assembling powerful hardware components, but actually being able to get all of the hardware pieces to work smoothly together.

“This beast is seven rigs in a single tower,” the report adds, “feeding into shared CPUs and split into seven virtual machines. Two Xeon E5-2697 hyperthreaded 14-core processors provide the equivalent of a quad-core CPU for each virtual machine.”

A full list of all the components used in putting this beastly machine together can be found here. Some of them include: