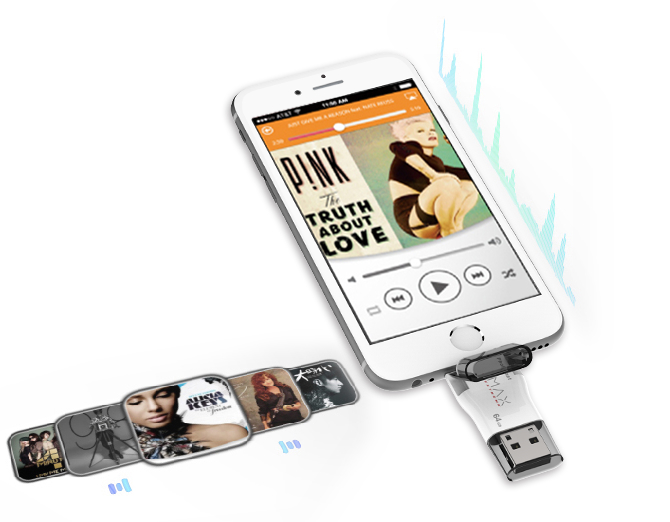 The 16GB iPhone curse won’t be as bad on the iPhone 6s, and even on older 16GB iOS devices, thanks to Apple’s storage optimizations in iOS 9. However, features like 4K video recording and Live Photos may eat away at the available storage on the phones, and users might have to find creative new ways to expand their storage.

Apple just slashed the prices of iCloud storage tiers in half, meaning that buying space in Apple’s cloud is even more affordable now. iCloud storage can be used to back up photos and store other files, but the downside of the cloud is that an Internet connection is always required to access them.

That’s where flash drives can come in handy, especially the kind of devices that have both USB and Lightning connectors, so that they can be used on computers and iOS devices.

Such is the case with PhotoFast’s iPhone-friendly dongles, which are now the fastest in the world. The i-FlashDrive Max Extreme comes in 32GB and 64GB sizes. More importantly, the “world’s smallest iOS and USB 3.0 flash drives is now the fastest,” the company says.

The MFi-certified Max Extreme will offer 85MB/s write speeds, which is supposedly the fastest in the market. The drive comes with a companion app, i-FlashDrive One, that can be used for calendar and contacts backup. The drives also feature three levels of security, including Touch ID support, Lightning Lock and USB Lock.

Pricing for i-FlashDrive Max Extreme starts at $170 (check this link).

Say Hello to the Fastest iOS Storage: PhotoFast Releases the MAX EXTREME
The World’s Smallest iOS and USB 3.0 Flashdrive Is Now the Fastest

TAIPEI, TAIWAN–(Marketwired – Sep 16, 2015) – PhotoFast, a leading smart accessory company based in Taiwan, today announced the second version of the company’s USB 3.0 flash drive. This MFi (“Made for iOS”) certified device offers the power to store, transfer, backup and stream data all while charging your iOS device at the same time.

Built with a Lightning connection, the PhotoFast MAX EXTREME can be plugged directly into iOS devices using USB 3.0 SuperSpeed, which is now the fastest in the market with an 85MB/s write speed.

With the MAX EXTREME, iOS users have anywhere from 32 GB – 64 GB of additional storage at their fingertips, enabling them to upload photos, videos, music, movies, business presentations and more, at an accelerated speed.

For easy storage management, the MAX EXTREME is compatible with the i-FlashDrive ONE app, where users can access their files while also backing up iOS calendars and contacts. There is also added security with three different types of access control for data including Touch ID, Lightning Lock and USB Lock.

“We wanted to rethink how we could benefit everyday users with our next update to the MAX series,” said Warren Wang, CEO of PhotoFast. “We live in a world where we expect data and information even faster, so we focused on providing enhanced speed while also maintaining the same small design.”

The i-FlashDrive MAX EXTREME models come in 32 GB and 64 GB capacities, with retail prices beginning at $170. To purchase the device, please visit: http://www.global-photofastshop.com/.

About PhotoFast
PhotoFast, a smart accessory company based in Taiwan, has been recognized globally since its establishment in 2003. Available around the world, PhotoFast’s storage solutions and mobile accessories have been praised by key industry influencers for their innovation, design and convenience. In 2009, PhotoFast became a member of the Apple MFi program and has been developing world renowned Apple products ever since. The company’s products are sold in over 50 countries and undergo extreme research and development prior to manufacturing, ensuring only the absolute highest quality tech accessories reach consumers worldwide. Pioneers of the consumer electronics market, PhotoFast continues to produce exceptional quality gadgets and break new ground in the technology industry.