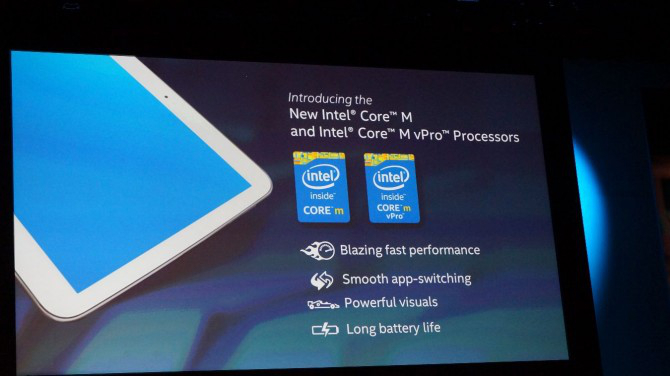 Intel on Tuesday at Computex 2014 unveiled a brand new processor, the Intel Core M, that may be crucial for future ultra-portable devices including tablets and Ultrabooks, but also a future MacBook Air model. To demo the processor, Intel unveiled the “world’s first 14nm fanless mobile PC reference design,” a 2-in-1 12.5-inch Windows tablet/laptop that’s just 7.2mm without a keyboard, and which weighs 670g.

“The innovative design is based on the first of Intel’s next-generation 14nm Broadwell processors that are purpose-built for 2 in 1s and will be in market later this year,” the company said. “Called the Intel Core M processor, it will deliver the most energy-efficient Intel Core processor in the company’s history. The majority of designs based on this new chip are expected to be fanless and deliver both a lightning-fast tablet and a razor-thin laptop.”

Apple is already rumored to be working on a new MacBook Air model that could feature a 12-inch Retina display. By using Intel’s Core M processor, the company could eliminate the fan of the MacBook Air, thus making the device even thinner and lighter. The fan assembly of the MacBook Air is still rather bulky – as this fan replacement iFixit guide for the early 2014 13-inch model shows. Thus, Apple’s current MacBook Air measures 17mm at its thickest point, no matter whether it’s an 11.6-inch or a 13.3-inch model.

Microsoft made a point during its recent Surface Pro 3 event to detail the new fan it designed specifically for the device, supposed to be 30% more efficient than the fan in any competing product. The custom fan also allowed Microsoft to shrink the Surface Pro down to just 9.1mm in thickness – comparatively, the Surface Pro 2 is 13.4mm thin.

One device that will use the new Intel Core M processor is the Transformer Book T300 Chi, a 12.5-inch 2-in-1 machine that packs a 2560 x 1440 display that was also announced at the same tech event..