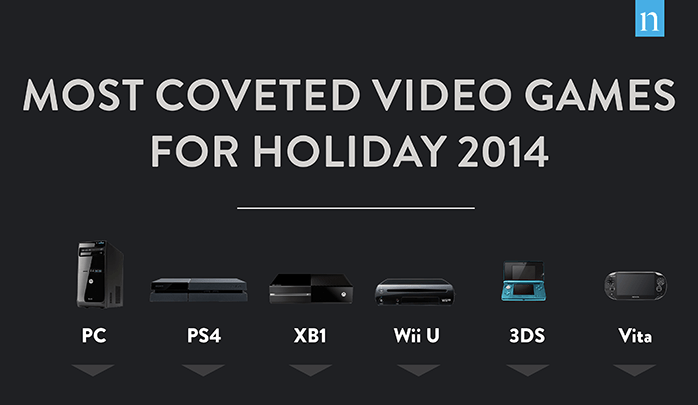 We’ve been talking about it incessantly, but the holiday gaming season is finally upon us. Destiny has been out for over a month, Bayonetta 2 launches on Friday and Sunset Overdrive hits store shelves next week. Despite a few notable delays, there are still plenty of huge releases ahead of us, but which are receiving the most attention?

In order to find out, Nielsen surveyed over 5,000 gamers and subsequently put together an infographic displaying the top 10 most coveted games for each of the six major consoles: PC, PS4, Xbox One, Wii U, 3DS and Vita.

If you ever doubted the effectiveness of advertising, you might want to take a look at the number one games on PS4 and Xbox One. After an extensive marketing campaign, Destiny has become the most wanted PlayStation 4 game of the season while Microsoft’s dedication to the Call of Duty series has propelled Advanced Warfare to the top of the Xbox One chart. Other than that, the two lists are nearly identical, save for Halo: The Master Chief Collection.

Nintendo’s top games are equally unsurprising — Super Smash Bros. on both the 3DS and Wii U. The Pokemon remasters, Alpha Sapphire and Omega Ruby are sure to have a huge impact when they launch on 3DS as well. The list for the other portable console, Sony’s PS Vita, is filled with an amalgam of Japanese titles making their way to the United States. And Minecraft, of course.

PC gamers are increasingly aligned with their console brethren, placing Assassin’s Creed Unity, Call of Duty, FIFA 15, Far Cry 4 and NBA 2K15 in the top 10. Civilization: Beyond Earth also found its way to number eight and The Sims 4 managed to climb to number one, despite a lukewarm critical reception.

The full infographic follows below. Anything you’re looking forward to missing from the list?