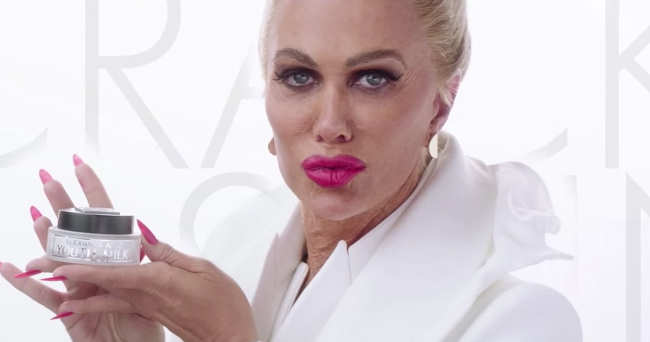 I just can’t stop watching Kristen Wiig’s beauty expert Alexanya Atoz promoting her Youth Milk lotion. The best thing about it is that it’s all part of the upcoming Zoolander 2 movie.

The sequel for one of Ben Stiller’s funniest movies yet premieres on February 12th, and the comedy is chock-full of stars to watch. Derek Zoolander (Stiller) and Hansel (Owen Wilson) are joined by Will Ferrell, Benedict Cumberbatch, Penelope Cruz, Olivia Munn, Christine Taylor, and Kristen Wiig.

In a 90-second teaser trailer that looks more like a commercial for an actual cosmetic product, Wiig does a tremendous job impersonating a pretentious beauty guru. In fact, you’ll not even recognize it’s Wiig behind all that makeup. And her voice sounds nothing like what we’re used to hear from this former SNL alumn.

So watch the clip below yourself, and when you’re done with it, play it again to make sure you catch all the innuendo.

If you can’t get enough of Zoolander’s universe, make sure you also watch Vogue’s 73 Questions interview featuring the now-aging supermodel at this link.