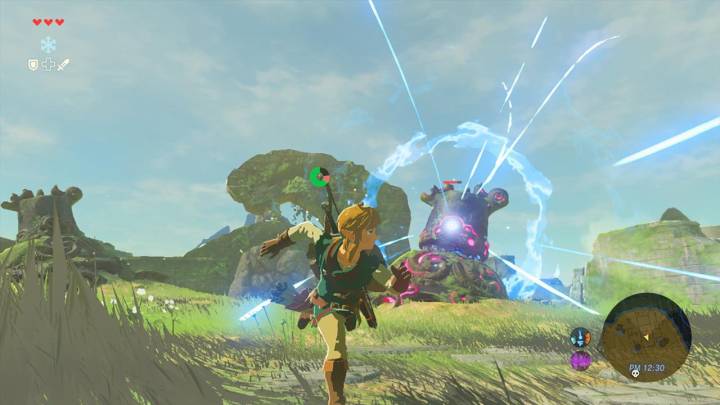 Not only is The Legend of Zelda: Breath of the Wild one of the most anticipated games of 2017, it’s also one of the last major titles to ever launch on the Wii U. With that in mind, you can understand why Nintendo is already hyping up the game, despite the fact that Breath of the Wild doesn’t even have a release date.

A couple of days ago, the Nintendo of Europe Twitter account shared a short video showcasing some of the abilities that Link will have access to using the runes that he collects along his journey. We saw a few of these in action when Nintendo demoed the game at E3 2016, but there are some unseen powers in the video as well:

The Cryonis Rune is the first that we see in the video, allowing Link to create ice pillars in the water in order to make his way to otherwise inaccessible terrain. Next up is the Magnesis Rune, which lets Link grab and lift metal objects from afar, such as a chest sitting at the bottom of a lake. The third rune on display is the Round Bomb, which is exactly what it sounds like — a round bomb that can be summoned repeatedly (after a short cooldown). And finally we see the Statis Rune in action, which gives Link the ability to lock objects in place and manipulate them.

The Legend of Zelda: Breath of the Wild is clearly drawing inspiration from previous games in the series, but it looks like players are going to have a ton of new interactions to explore when the game launches for Wii U and NX in 2017.

Tags: Nintendo NX The Legend of Zelda: Breath of the Wild Wii U