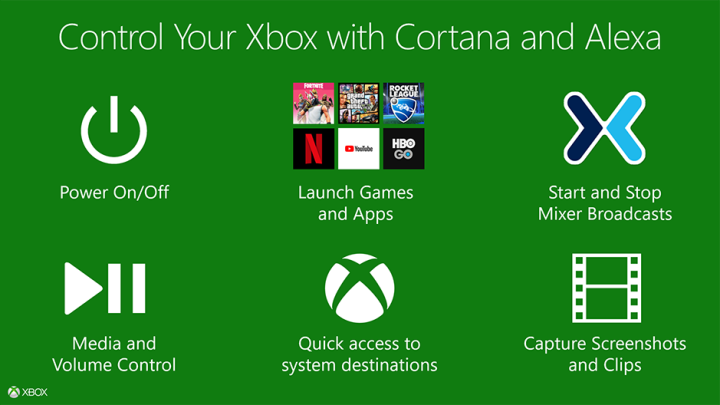 When the Xbox One launched, the revival of the Kinect seemed like a distinct possibility. After all, Microsoft had built all sorts of clever voice commands in to its camera, but within months of the console’s arrival, the writing was already on the wall. The Kinect was dead, and Microsoft admitted as much when it ceased production in late 2017.

Most disappointing of all was that the Kinect was the best way to interact with the console via voice commands, as no one is willing to plug in a headset or a mic every time they want to tell their Xbox One to turn off, change the channel, or play a game. But after all this time, Microsoft is finally introducing two legitimate alternatives as both Cortana and Alexa-enabled devices can now be used to control the Xbox One via voice commands.

Starting this Thursday for select Xbox Insiders in the US, the Xbox Skill can be used to power the Xbox One on or off, adjust the volume, launch games and apps, capture screenshots, start and stop Mixer broadcasts, and more. If you have the Xbox Skill on your Echo, for example, just say “Alexa, start Halo 5” to play the game.

Here are the steps you need to follow if you want to use Cortana:

Here are the steps you need to follow if you want to use Alexa:

The Xbox Skill integrates with a variety of devices: Windows 10 PC, Amazon Echo, Harman Kardon Invoke, Sonos One, Cortana and Alexa apps on iOS and Android. The Xbox Skill will be rolled out to Xbox Insider rings gradually before eventually launching for all users at some point in the future.