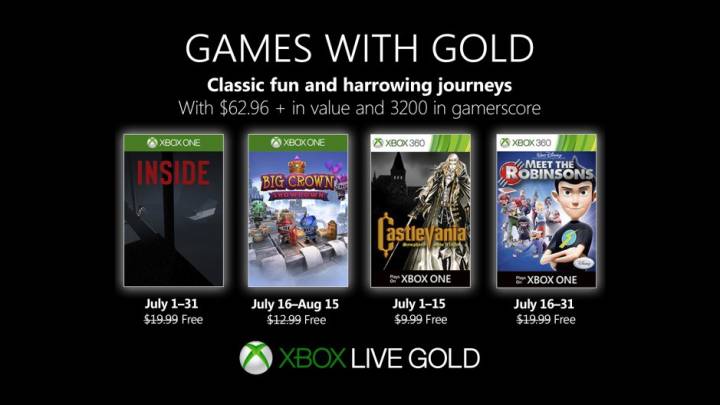 This month’s selection of free Xbox One and Xbox 360 titles for Xbox Live Gold members is about as mixed a bag as they come. The headliner of July is Inside, which is one of the most disturbing, fascinating, and engrossing games of the last five years. It’s a bit gruesome, but absolutely worth having in your library.

The other game of note is Castlevania: Symphony of the Night, which first came out on the PlayStation in 1997, but is still one of the best games of its kind ever made. If you’re not quite ready to shell out the cash for spiritual successor Bloodstained: Ritual of the Night, you can grab the game that inspired it for free right now.

Here are the details on the availability of all the Xbox One and Xbox 360 Games with Gold for July:

You’ll save about $63 if you pick up all four games, and can add up to 3200 points to your gamerscore. Also, keep in mind that each of the Xbox 360 titles are backward compatible with the Xbox One, so even if you don’t have an Xbox 360 on hand, you can still download all four games listed above. And as always, some of last month’s free games are still available if you hurry, so be sure to download them before they go back to being paid.