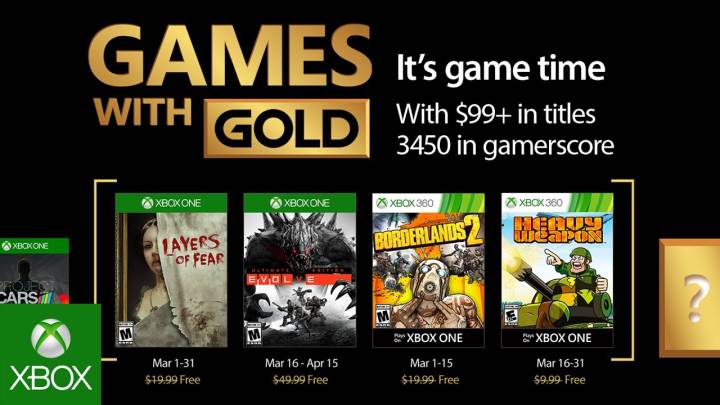 While hundreds of thousands of gamers all over the world will be spending the month of March playing Zelda: Breath of the Wild on their new Nintendo Switch, there are plenty of people who are happy to stick with the Xbox One instead. If you’re one of those people, you will be happy to learn that you’ll have some exciting, completely free games to play when the Games with Gold selection drops on March 1st.

Xbox One owners will be treated to terrifying horror game Layers of Fear and the Ultimate Edition of online first-person shooter Evolve. Additionally, loot-bonanza FPS Borderlands 2 and retro arcade shoot ’em up Heavy Weapon will be available on Xbox 360 as well as Xbox One via backward compatibility.

Here are the details on the availability of March’s Games with Gold:

If you’re looking to add four action-packed games to your collection, the March Games with Gold collection should be perfect. The Xbox team also notes that you’ll be saving over $99 by picking up all four of these games while they’re being offered for free, so be sure to download them as they become available throughout the month of March and before they go back to regular price.

Check out all four of March’s free Games with Gold on Xbox One and Xbox 360 in the video below: