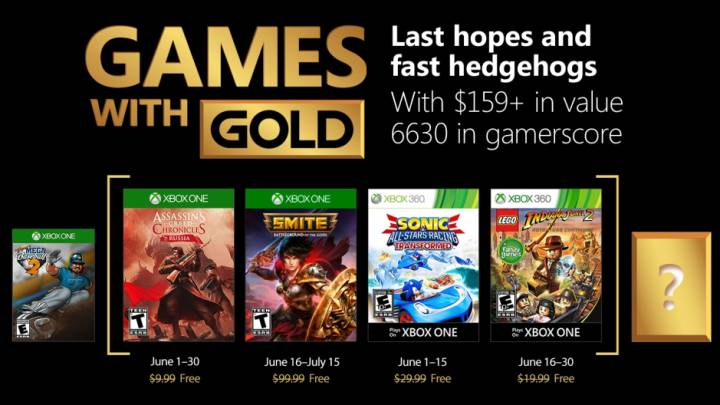 With E3 2018 around the corner, the video game release schedule has slowed to a crawl. Other than Detroit: Become Human, there hasn’t been much worth getting excited about lately (especially for Xbox fans), but that will change in a few days when the first free games of June arrive for all Xbox Live Gold subscribers.

June brings an eclectic collection of games to the Games with Gold program, including a side-scrolling Assassin’s Creed game, a Sonic the Hedgehog racing title, the sequel to LEGO Indiana Jones, and the $100 Smite Gold Bundle, which features 20 extra gods to choose from and over 50 bonus items including skins and announcer packs. Smite is free-to-play, but this free bundle will help spice up the experience for anyone who downloads it.

You’ll save over $159 if you pick up all four games and can add up to 6630 points to your gamerscore. Also, keep in mind that each of the Xbox 360 titles are backward compatible with the Xbox One, so even if you don’t have an Xbox 360 on hand, you can still download all four games listed above. See them in action below: