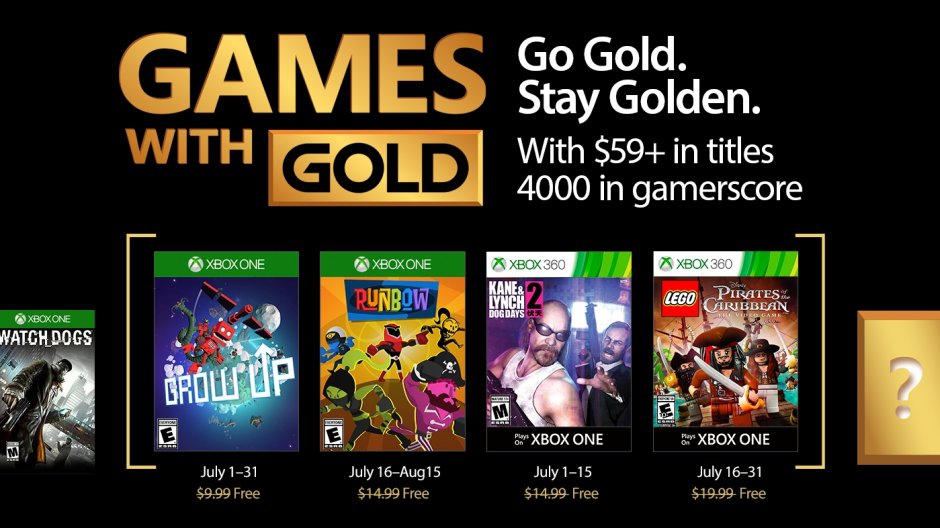 E3 2017 was make or break for Microsoft. Not only did the company need to convince everyone that the Xbox One X is going to be worth $500, it also needed to showcase a sizable selection of exclusive games for the Xbox One. I’m still not sure they accomplished either of those goals, but the world keeps turning regardless, which means that Games with Gold is back next month with four more free games.

July’s Games with Gold selection brings indie games for the Xbox One and bigger titles for the Xbox 360. Grow Up is the sequel to 2015’s Grow Home, which are 3D platforming games that focus on climbing. Runbow, the other Xbox One title, a 2D action party game that supports up to nine players.

Thanks to backward compatibility, Xbox Live Gold subscribers with an Xbox One or Xbox 360 will be able to download Kane & Lynch 2 and LEGO Pirates of the Caribbean as well.

Here are the details on the availability of the Xbox One and Xbox 360 Games with Gold for July:

You’ll save almost $60 if you pick up all four games and can add up to 4000 points to your gamerscore. Also, keep in mind that each of the Xbox 360 titles are backward compatible with the Xbox One, so even if you don’t have an Xbox 360 on hand, you can still download all four games listed above.

You can check out footage of all four of July’s free Games with Gold in the video below: