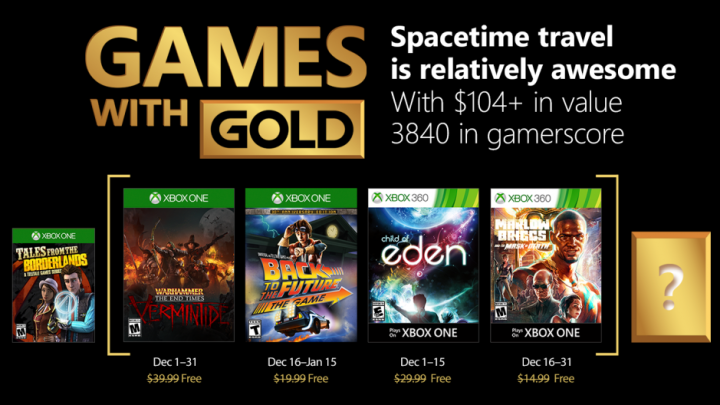 Although we’re currently far more concerned with the awesome deals Microsoft is offering on Xbox One and Xbox 360 games over on the Xbox Store, it’s never too early to start getting excited about a new month of freebies. For those of you with active Xbox Live Gold subscriptions, your monthly slate of free games has been announced.

Unfortunately, December’s selection is rather uninspired, though all of these games will keep you occupied next month once you run out of spending money on Black Friday deals. Vermintide is definitely the highlight of the month — a four-player co-op FPS that takes place in the world of Warhammer. Back to the Future: The Game is a solid Telltale adventure game, and Child of Eden is a psychedelic prequel to all-time classic Rez.

You’ll save over $100 if you pick up all four games and can add up to 3840 points to your gamerscore. Also, keep in mind that each of the Xbox 360 titles are backward compatible with the Xbox One, so even if you don’t have an Xbox 360 on hand, you can still download all four games listed above.