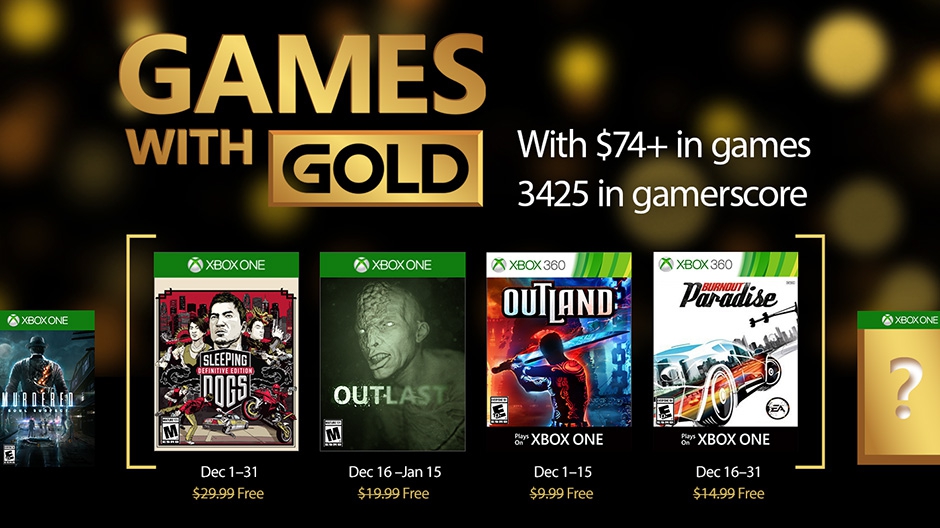 With just a month left in 2016, we’ve decided to bring back a feature that we abandoned over a year ago. Every month, Xbox Live Gold subscribers are rewarded with a collection of free games on Xbox One and Xbox 360. On Tuesday, Microsoft revealed the four games that Gold subscribers will receive in December.

This month, the two free Xbox One titles are open world shooter Sleeping Dogs: Definitive Edition and the survival horror hit Outlast. For Xbox 360, Gold subscribers will be able to pick up Outland (which is totally different than Outlast) and the critically acclaimed driving game Burnout Paradise. As always, both Xbox 360 games will be backward compatible on Xbox One as well.

Here are the details on the availability of December’s Games with Gold:

While Games with Gold can be hit or miss at times, this month’s selection is about as good as we’ve ever seen. Sleeping Dogs is one of the best Grand Theft Auto-alikes ever made, Outlast and Outland are two great indie titles and many would argue that Burnout Paradise is one of the best open world racers ever made.

If you’ve already spent too much money on holiday gifts for your friends and family to afford any of the shiny new games that are launching over the next few weeks, at least you’ll have some great free Xbox games to fall back on.