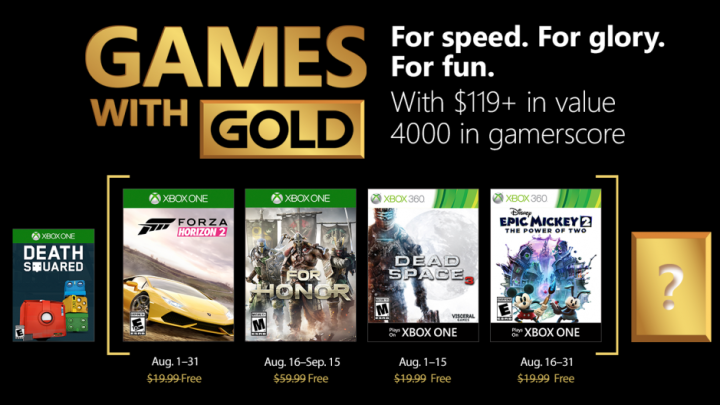 This summer has been eerily quiet for video games, but the upcoming selection of Games with Gold for Xbox Live Gold members is one of the best we’ve ever seen. Seriously, if you pay for an Xbox Live subscription, you need to make sure that you log in and grab these games as soon as they become available next month.

Forza Horizon 2 is the biggest name on the list, and also happened to be my favorite game of 2014. Even since Forza Horizon 3 has come out, I still go back to the second game on occasion just to explore the European countryside and listen to the unbeatable radio stations. And once you’re done racing in Forza, you can go back in time and do battle with knights, vikings, and samurai in For Honor, one of the better melee combat games of the generation.

You’ll save over $119 if you pick up all four games and can add up to 4000 points to your gamerscore. Also, keep in mind that each of the Xbox 360 titles are backward compatible with the Xbox One, so even if you don’t have an Xbox 360 on hand, you can still download all four games listed above. See them in action below: