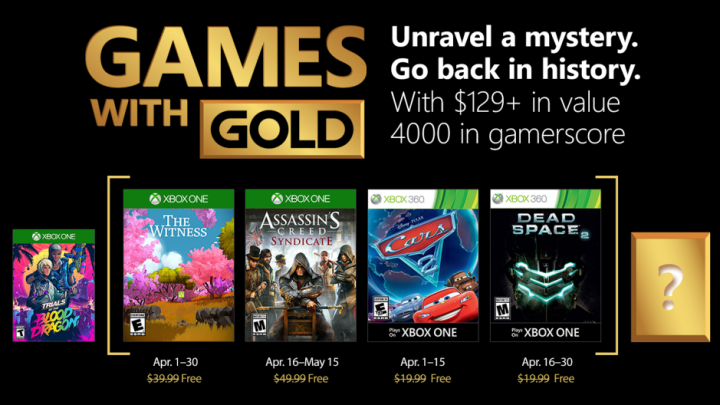 As disappointed as we were in the first couple months of Games with Gold this year, Microsoft has completely turned the program around the last two months. After offering a satisfactory selection of games last month, Microsoft bumped the quality up even higher for April with four titles that will fit nicely in anyone’s collection.

The Witness was one of BGR’s ten best games of 2016, so if you haven’t played it yet, be sure to grab it while it’s free for all Xbox Live Gold members. And while Unity might have been a low point for the Assassin’s Creed series, Ubisoft rebounded well with Syndicate in 2015. You may have skipped it when it came out, but now that it’s free, all you need is some room on your hard drive. And believe it or not, both Xbox 360 games are great too!

You’ll save over $129 if you pick up all four games and can add up to 4000 points to your gamerscore. Also, keep in mind that each of the Xbox 360 titles are backward compatible with the Xbox One, so even if you don’t have an Xbox 360 on hand, you can still download all four games listed above. See them in action below: