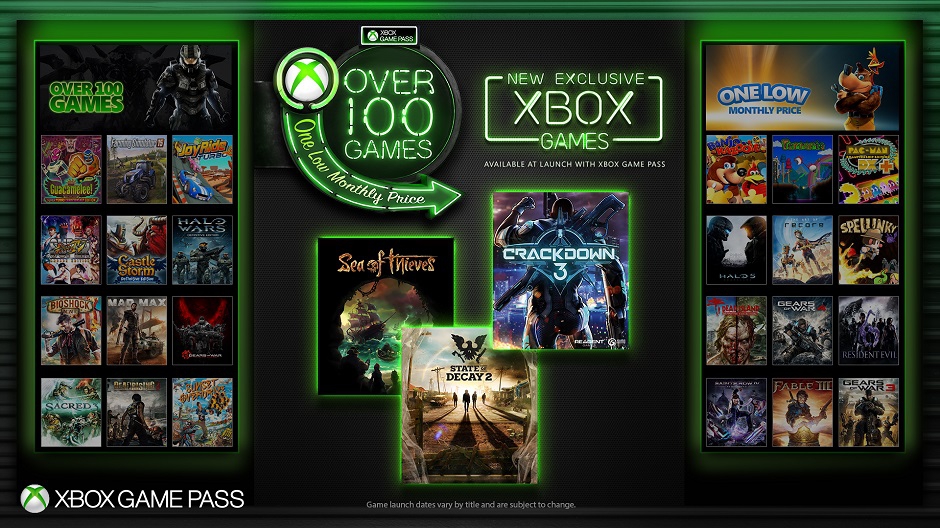 2017 was not the most promising year for the future of the Xbox One. While the Switch dominated headlines and the PS4 got more console exclusives than anyone knew what to do with, Microsoft remained quiet (save for the launch of the admittedly fantastic Xbox One X). But quiet stretch is now over, as Microsoft announced on Tuesday that all new Xbox One exclusives from Microsoft Studios will be added to the Xbox Game Pass on launch day.

In case you missed it last year, Microsoft launched a subscription service that allows Xbox One owners to pay $9.99 a month in order to have access to a ever-growing collection of downloadable games. Going forward, all first-party Xbox One games will be available as part of the Xbox Game Pass service from the day they launch.

“This plan to bring new games timed with their global release into Xbox Game Pass not only includes announced titles like Sea of Thieves, State of Decay 2 and Crackdown 3 but future unannounced games from Microsoft Studios including new iterations of our biggest Xbox One exclusive franchises such as Halo, Forza and Gears of War, on the same day they launch,” said Xbox head Phil Spencer on the Xbox Wire this week.

The program will kick off with Sea of Thieves on March 20th, which means that anyone with a subscription for Xbox Game Pass will be able to download and play the game on launch day. Not only does this add significant value to the service, but it gives Xbox One owners an affordable way to try new games without shelling out $60.

While the library of Xbox One exclusives is far thinner than that of the PS4 at the moment, 2018 is going to be a make or break year for the platform. This development won’t mean much if we only see half a dozen first-party games on the Xbox One this year, but if Microsoft Studios increases its output, this could be a huge boon.