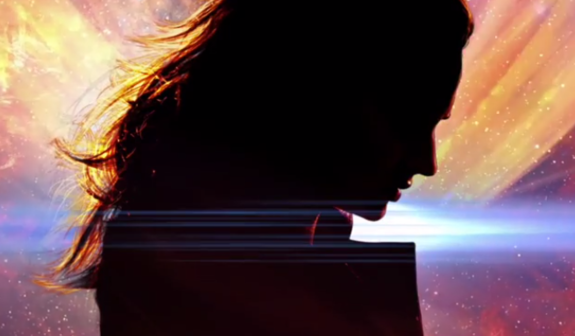 “They’re right to fear me.”

So says a very intense Jean Grey, played by actress Sophie Turner, in the first trailer that finally aired tonight ahead of the February release of X-Men: Dark Phoenix. The highly anticipated film is an adaption of the storyline from the comics of the Dark Phoenix force that tries to take over Jean’s mind, and we see the stakes at play here in the trailer. Jean, an extremely powerful mutant, in danger of being overtaken by a force she can’t control, and how dangerous that is for everyone around her.

CBS’ The Late Late Show With James Corden had the world premiere of the roughly 2-minute trailer which shows all the familiar faces that are coming back. Jessica Chastain is here playing a villain this time around, but the returning players include Jennifer Lawrence, Michael Fassbender, Nicholas Hoult and James McAvoy as the cerebral professor.

The new film is written and directed by Simon Kinberg, the screenwriter for X-Men: Last Stand. A quick take about the new trailer in The Hollywood Reporter speculates that this will presumably be the last film to feature the cast members who took on these roles back in X-Men: First Class from 2011. “The looming Disney-Fox merger will mean the X-Men will be folded into Marvel Studio’s cinematic universe,” the piece notes, “with Disney’s Bob Iger recently confirming to The Hollywood Reporter Marvel Studios head Kevin Feige would oversee the X-Men characters once the merger was completed.”

Helping fuel some of the anticipation has been the shuffle in the movie’s release schedule from November to February of next year. That was done partly as a result of some reshoots but also for the studio to be able drop it into the same spot on the calendar that saw Black Panther this year crush it at the box office.

From the Dark Phoenix official synopsis: In the movie, “the X-Men face their most formidable and powerful foe: one of their own, Jean Grey. During a rescue mission in space, Jean is nearly killed when she is hit by a mysterious cosmic force. Once she returns home, this force not only makes her infinitely more powerful, but far more unstable. Wrestling with this entity inside her, Jean unleashes her powers in ways she can neither comprehend nor contain. With Jean spiraling out of control, and hurting the ones she loves most, she begins to unravel the very fabric that holds the X-Men together. Now, with this family falling apart, they must find a way to unite — not only to save Jean’s soul, but to save our very planet from aliens who wish to weaponize this force and rule the galaxy.”